The 240v power input to the inverter will be delivered by 2 means.  Primary will shore power, the other will be from the on board generator.  Some models of inverter will deal with this internally and even combine the power sources. This on the face of it seems fine, accept of course that 240v is AC or alternating current.  This means that in the case of UK and European power 50 times a second or 50Hz the current alternates between positive and negative.  This is fine if you are lucky enough to get both in sync.  Chances are very high that if you do it won't stay that way for long as they will drift slightly, especially the generator.  More on AC here.
I am sure if I searched around I could find a device that could combine the power inputs but if I needed that amount of amperage on the boat I would have bought one of the inverters that can do this.
So to avoid the 2 sources being on together a control has to be in place.  This could be a selector switch or a relay or even as basic as unplugging the shore power and plugging in the generator.  I have chosen a relay because:-
If the shore power is on power flows through the relay when it is in the un-energised position this is the default setting and essentially the relays are doing nothing or switched off.
If the shore power goes out the generator can be switched on buy the remote panel I have.  By so doing the relay becomes energised and the contacts inside moved to allow power from the generator only.
Now, if the power should come back on say after a power cut, I don't want this to flow in as well.  This is where the auto function of the relays come in to its own.  Because the relay is now energised the power now coming from the shore power can only get as far as the relay and so can't 'mix' with the generator power.  Once the generator is turned off the relay will revert to closed and let the shore power back in. 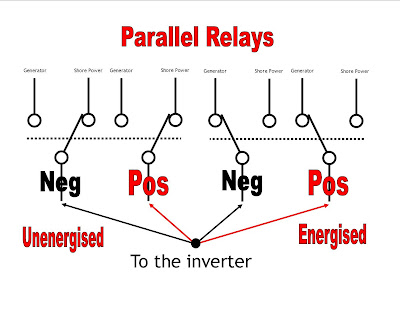 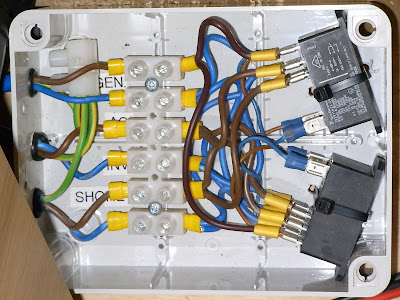 The actual unit
I have used 2 relays in parallel to offer some redundancy and to spread the load although each relay can handle more than is required.  I plan to limit the power input 25amps.  This is done on the inverter.   More on that later.
The finished (accept the Cat 5E) power cupboard. 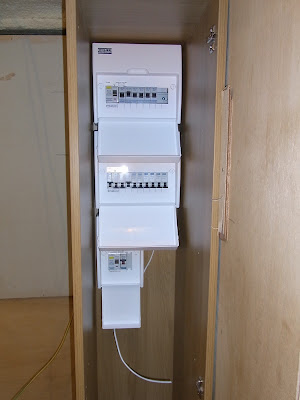 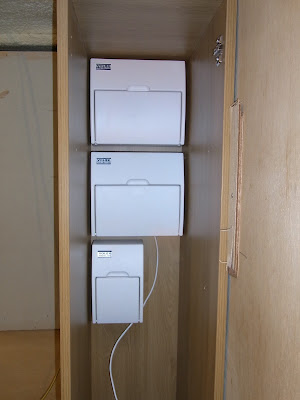