After seemingly adding another wire then thinking of something else needing one about half a dozen times I eventually put in all the wires I could think of.  I know there will some I've missed but I can still run them safely if I need to.
The electric cupboard is part of the kitchen units.  Initially I was going to use standard units and cut them in as required, but the owner of the kitchen manufacturing company is also a keen boater and when he heard it was going into a boat he came and had a look.  He said as they manufactured the units they could make them to fit the boat and save me having to hack the units about.  I made him a template and this is the result. 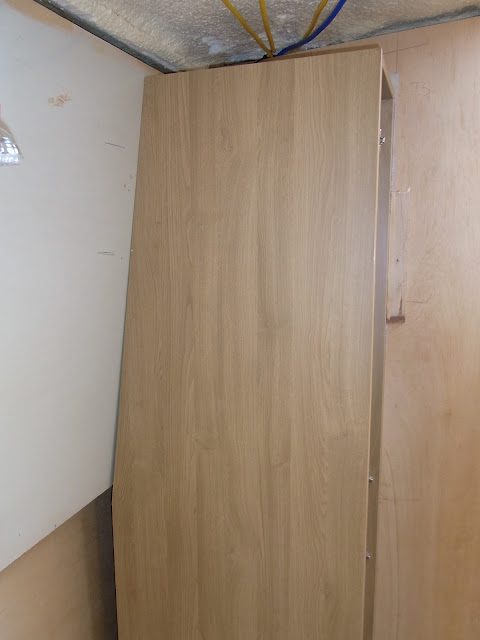 More on this as I fit the kitchen
Once the cupboard was sited I fitted the consumer units and cut the holes and run the cables through. 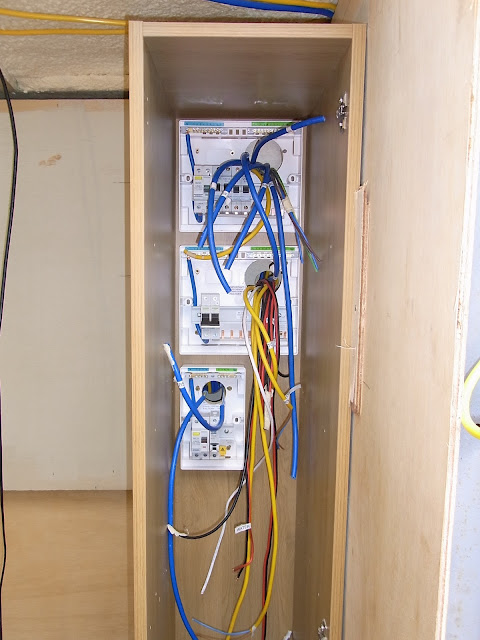 
The reason for 2 x 240v CU's is that the way the inverter handles power means that if the boat is on shore power or generator it will pass mains through AC out 2.  If the inverter is generating its own 240v from the batteries it will drop out the AC out 2.  This enables automatic AC management for heavy items like Air Con, or in my case immersion heater.  Neither of these would last long on battery power.
The mid unit is dedicated to 12v systems only and the top one is dedicated to 240v systems that I want through AC out 1 even if the 240v is coming from inverted power. 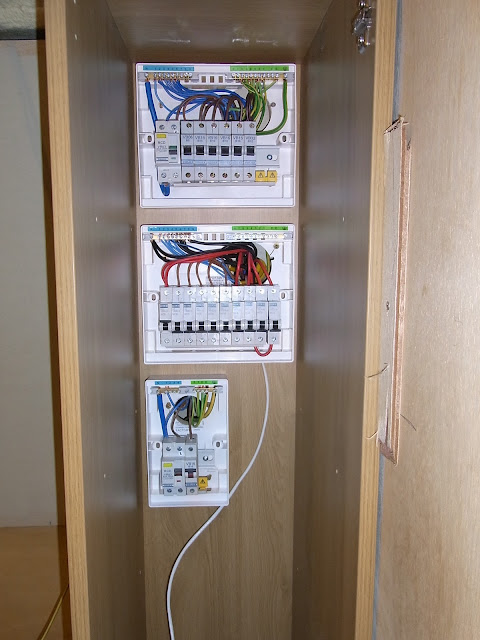 The white wire is a CAT5E cable for inverter / PC interface
All the connecting up took about 3 hours, and was jolly hard work.  The cupboard is only 265mm wide inside and it did nothing for the arther in my hands.
The mains into the inverter needs to be split as it will be powered by shore or generator.  To ensure that only 1 source can input at a time it needs a selector switch, or so I initially thought.  On thinking about it a bit more I decided an auto switching power relay would do the job better.  So thats on the list to be made very soon.  Watch this space.
Posted by Kev's Blog Space at Wednesday, March 02, 2011