Little Bit Of A Setback

I've had a little bit of a setback of late, I've been watching it hoping it would go away, but as its getting colder its getting worse.
So what is it?
The laminate flooring I used to line the ceiling is distorting. I suppose as the boat gets a tiny bit shorter.  Essentially is compressing and was beginning to ripple midships.  Other option is that the laminate is expanding with the damper weather.
Normally when you lay this sort of flooring it's know as a floating floor because its not fixed anywhere and a 10mm gap is supposed to be left all around the edge of any room its laid in to allow for expansion etc.
Compounding this also is:- 1. I have had to glue it to the roof batons to keep it in place. 2. on the port side I did the whole boat in one continuous length of about 12.5m.  Its only this part that's distorted.
The planned repair is underway and involves removing the affected mid section and cutting in a expansion joint above the bedroom door separating the run.
So this is what its looking like. 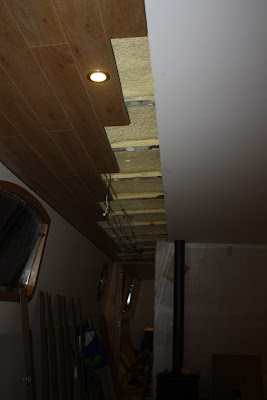 I shall leave it a couple of days for it to normalise, I have cut some more of the glue to free up more movement.  Then it will be all put back up again and hopefully that will be the an end to the matter.
Posted by Kev's Blog Space at Tuesday, October 04, 2011