The last couple of days on the boat has really been themed with electrical things.

I was most excited to find this GSM gadget.  I wanted the ability to get the boat ready for our arrival by switching on the inverter which would then power the heating and fridge.  Initially I was thinking just one switch but as I looked I found I could get this 7 channel unit for the same sort of price.  I added a fuse inside the unit as its easier to get to there, I might also add and LED to show the power status. 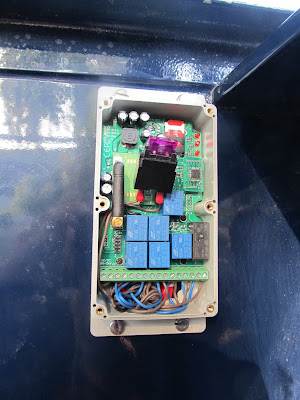 The black relay is operated by phoning the unit.  The clever bit on this is it will accept numbers form a white list only.  Phoning this relay accepts the number then hangs up (no charge call) and switches the relay either ON or OFF depending on where it was left. This relay can also be TXT operated.

The rest of the blue relays are TXT operated only again on a white list.  A message can be to turn either =ON or =OFF.  As well as a number of other functions a TXT can be sent to get the status of all the relays.

So I have set relay one to switch on the inverter, two to set the heating on and three to control the fridge.  The other channel's I'm sure I'll find a use for.  I've put the wiring tails in ready.

Alternator parallelling is simply joining the output of 2 or more alternators,  but it's best not to permanently wire the together.

To best make the connection a contacter, a type of big relay is used. 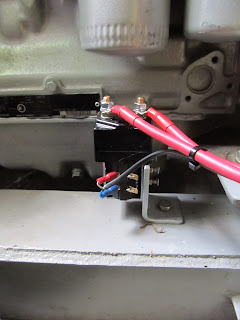 This one has a 150amp continuous  rating

There are different ways of switching the relay from a simple switch on the dash, or via a self energising relay system.  What ever way its important that the relay drops when the engine is stopped.  I have fitted an LED to display the status of the contactor. I haven't yet installed this on the dash its just on a fly lead.

I have chosen to use a self sensing relay driven by the output or the start battery alternator.  The system listens to the voltage of this alternator, once it sees its charging it switches its internal relay which in turn energises the contacter and the parallelling is made. 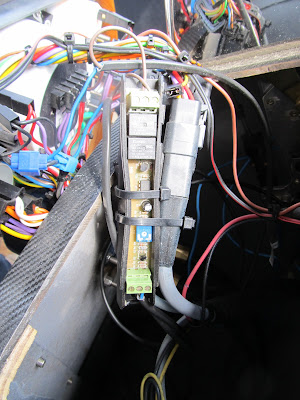 And this is the finished job. 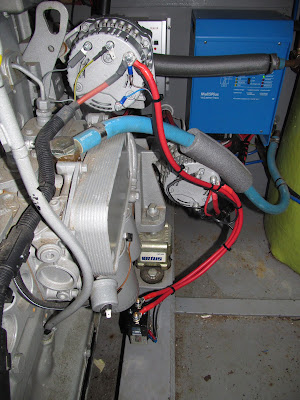 The top alternator is (was) the start battery the lower is (was) the domestic, although once they are joined it is simply one curcuit, each sharing the workload over both battery systems.

The results so far are that both alternators now run at a moderate temperature.  I also noted that the battery monitor was showing 14.6v  I never saw this as high before.  My conclusions so far are that it,s working as it should.  Time will tell and if in the unlikely event it proves troublesome it's easy to de-activate.