The Nice Thing About Having A Boat Is:-

There is always something to do.  Always a problem to be solved, or a combining of my interests.

I arrived at the boat yesterday afternoon armed with necessary tools to sort out the grotty and dismal array of plants and mostly weeds on our mooring.  This is supposed to be done by the Environment agency who we rent from but there doesn't seem to be a schedule of maintenance but strangely there is a schedule of Direct Debits.  Anyway before I got on with the stuff I like I decided it was best to get this done and out of the way as the weather was reasonable and the forecast was poor. 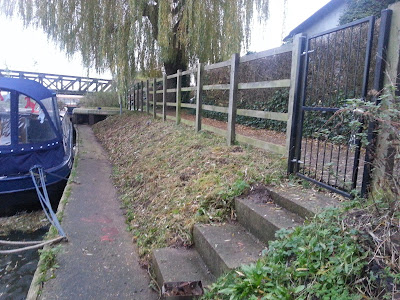 About 2 hours saw the job done and all the dead nettles, thistles and sapling Elderberry trees were dispatched.  Hopefully this will allow some grass to grow.

I have been playing with  streaming CCTV for a while now and having bought a new Webcam decided I needed to run some new consealed wires to get the signal back to the laptop in the lounge and then out though the router to the interweb.  Knowing the limt for USB is 5m I saw an adaptor that extends USB over cat5e.  On my last visit to the boat I duly installed a length of cat5e cable in the bedroom ceiling down behind the wardrobes, under the bathroom cabinets and into the lounge drilling necessary holes as I went along all of which are out of general sight. All of this took several hours.

Once this was done I powered up the Webcam only to find for whatever reason that it would only send a 174 x 122 image not the 1280 x 1024 it was bought for.  A bit of digging on the canal forum as there are lots of very cleaver people there with a combined mass of knowledge on all subjects lead me to order a 15m powered USB cable.  Prior to installing the cable I tested it and all was good.

How pleased was I that when I put the cat5e in the ceiling void I decided to put in an additional trace wire. The result was the new UBB cable was fitted in about 20 minutes.

The intention is to stream live video from the boat as we cruise along, or sometimes if we are just sat mooring.  This can be seen at the Vaughn site.  If you go over there you can become a follower and you will get an email when the camera goes live.  All of this is free and there's currently no adverts on the video feed.

Next up was to run some more cat5e (2 lots) so I can run the bedroom TV on an HDMI extender as this too has a 5m limit and get HD TV in the bedroom rather than just what comes down the coax feed.  While I had the carpet up to hide the cables I sorted out the creaky floor that has been anoying me on my seemingly evermore frequent visits to the loo at night.

This morning it was time to service the generator.  It has reached 2400 hours and the oil was looking decidedly black.  With the oil and filter changed and the diesel filter checked for water (none) and changed it was the turn of the impeller.  This as you can see was definitely in need of changing. 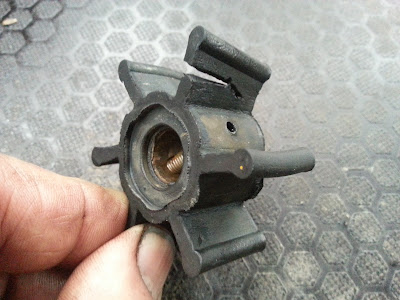 The fan belt was checked for wear and adjustment and both were found to be fine.

A while back I moved the Inverter to under the stairs See Here.  And having sorted out the charging so the charger works much harder it then got really hot which caused it to reduce its output so it remaind happy. Result back to square one after a while of running. See you solve one problem and another problem arises!  The only thing to do is to put some extraction fans in to dump the heat.  The easiest way to power these is from the inverters own fan power supply, that way they would only be on as required.  So this meant taking the inverter out again to gain access to the fan wiring.  I took no chances this time.  I photographed the wiring just to remind me not to wire it up wrong. 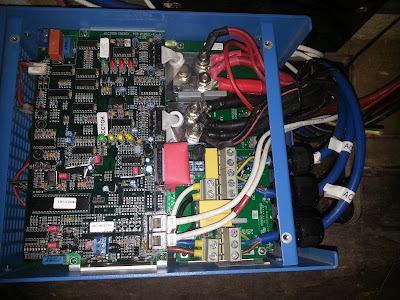 The fan on the Victron is 24v so I got 2 x 12v 5" fans and wired them in series, drilled 2 x 5" holes in the stair sides just next the the inverter, put in some wiring with an in line connector and hey presto it all worked. 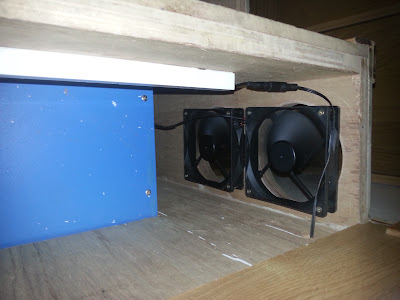 I just need to get some nice covers for the outside of the stairs. 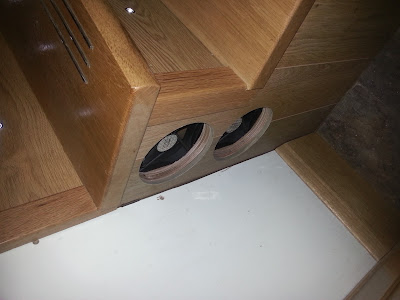 It's not too much of a problem as its very difficult to see them.  They are not in general sight.

The inverter now runs cold to the touch and is once again outputting maximum charge.