As we carry over 2000L of water in the bow tank the trim of the boat is affected between full and nearly empty.

In order to minimise this I decided to put some ballast in the water tank.  As my brother owns a stone worktop company Granite Unlimited he gets plenty of cut outs from the sinks and hobs.  The beauty of natural stone is it's free for me, very heavy 30mm is 90kg per Sq/m and its totally unaffected by water. 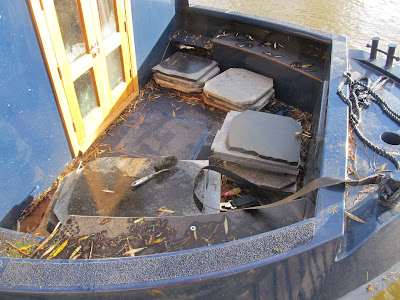 This small amount is 750kg worth

Now it's in the water tank the leverage being right at the front of the boat has brought it down nicely.  It has displaced about 175L of water so the net effect on a full tank is about 500kg of extra weight and on an low tank nearer 750kg.  It's true we have lost some capacity but is not going to be a problem as I see it because we will simply have to fill up that bit sooner which in turn will mean a more frequent refreshment of new water. The stone is nearly 3000kg a cu/m whereas water is 1000kg 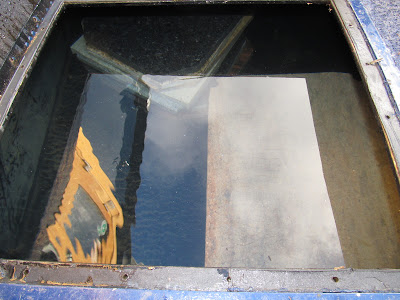 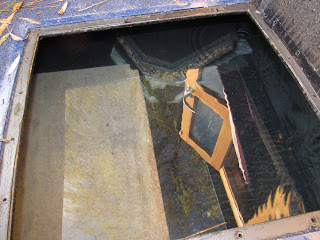 In the water tank

Since being on the water we have filled no more than 4 times from taps along the river, and the tank was freshly painted when we launched.  So where has all this come from? 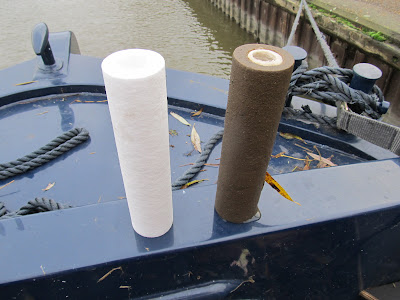 New 5 micron filter on the left 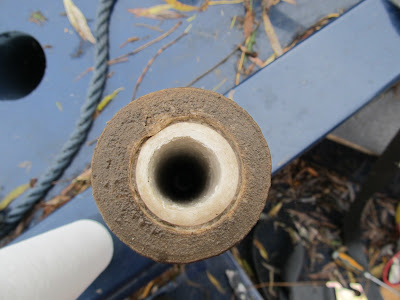 The one removed after around 8000l

While I had the tank empty I moved the stop cock to be right on the copper exit stub from the tank.  I feel a lot happier about that. It was close before but was in a plasticc pipe run.

All this was done mid week while on the boat myself.  We have a rule when we are both on the boat.  I mustn't do any work.  I did however slip a couple of winterising jobs past SWMBO.  I installed a frost stat.  It's actually the original CH controller that came with the Mikuni.  I opted to use the RF or remote version as we can move it around the boat depending on where we want to control the heat more fully, i.e. bedroom or lounge.

I have wired it in parallel so it will trigger if the temperature drops below 5c.  The remote unit which looks exactly the same requires 240v at the receiver end so won't trigger when the inverter is off.  This additional one is battery powered.

The other little job sneaked by was draining out enough water form the generator to top it up with antifreeze.  I never knew if it had any in as I acquired it used so to be sure I have put my own in.