OK not quite yet but we have the necessary qualifications to go.  Sorry to get you all excited.


Over the last month we have both been studying for the necessary qualifications we need to be in charge of our boat when we take it to France.

To be legal unless you are on a hire boat in which case you need no training, knowledge, experience what so ever! the master of the vessel needs to have a VHF radio licence, to know the CEVNI rules and demonstrate your competence to handle a boat, in our case over 10m, this is the ICC part.

We did the VHF first about 3 weeks ago on a day course.  This we both found very interesting, I especially liked the DSC part, but this is pretty useless on inland waterways accept for group calling or calling a known MMSI of another boat, a bit like a phone number.

Once we had our license I bought a fixed radio and a handheld.  Two are recommended for France.  We chose models form Standard Horizon.  The fixed set also has GPS which is a bit of an overkill for inland waterways but it was only a small amount more and it gives speed and heading information as well as the time. The handheld is a just simple VHF only set.

This is the main set. But ours is in black 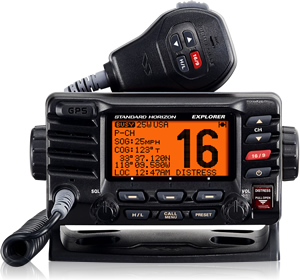 This is the handheld.

Once we had the VHF set it was then necessary to apply for Ship Radio License to get an MMSI number.  This was easily done online on the Offcom website and resulted in our own MMSI number 350974?? and our UK call sign 2GHQ6.  Part of this registration my personal details so the MMSI is tied to a user in case of emergency and I suppose misuse.  Once we are in Europe I will programme in a the ATIS

Then it was down to studying the CEVNI signs.  It's a bit like learning the highway code but for the river, except it’s not as well organised as it's (IMO) a bit of a dog’s dinner as it's compiled by bits from all over Europe.  As well as the signs there's also lots of different signs on various types of boat by day and night and differing in the type of vessels and what it’s doing.

This is the full CEVNI and here is a set of flash cards I compiled (with permission) from the initial work done by Bryan Griffin.  In the end the multiple choice paper was passed by both of us simply because we drilled ourselves with the cards for a good couple of weeks off and on.

The practical part for the ICC Involved us taking our boat our with our examiner for the afternoon and demonstrating MOB (Man Over Board) recovery procedures and other boat handling and mooring skills as well as questions about river  craft, safety, emergency procedures.  Most of the handling was simply demonstrating what we do each time we take the boat out, but we did have to practise the MOB as we had never done this so  a good few ours were spent pirouetting around retrieving our very own MOB, yep a  buoy tied to a bucket.   The bucket acts as the simulated weight and sea anchor. Each time we practised this MOB it really got the adrenalin going.  Even though it was only a buoy and bucket it becomes so real.
Anyway, after that the instructor / examiner showing me my boat WOULD go backwards under control despite my insistence it wouldn’t and a final few questions he told us we had both passed.

I have also registered Avalon on the SSR and now sport the Reg. No.SSR1535623

I do have a massive blog to do on the very complex subject or Generators batteries and charging. I will get this done ASAP as I have learnt a lot with the help of Clive one of my blog readers.
Posted by Kev's Blog Space at Saturday, February 23, 2013