It's a fact, when a group of boaters get together it's not long before the talk turns to one of several subjects and pretty much every time toilets will crop up.

It was my intention to have all essential services on the boat running on 12v.  These I figured were water pump, lights, central heating and toilet.

Since being on the water we have had problems with the toilet back flowing into the bowl about 1 in 5 times this of course is more noticeable on "longer" visits.  Initially I thought it was the non return valve being faulty or damaged, but having serviced this and the macerator unit the problem still existed.

As winter drew on I noticed that when the toilet flushed the lights would dim significantly on the initial start start of the flush cycle.  As the batteries are working harder this time of year the charge will drop to 80% overnight with the fridge freezer running.  It was noticeable that when I am on the boat alone the problem was less frequent as I don't bother with the fridge for a couple of days at a time which keeps the batteries up to 90+% overnight.  Also it eventually became apparent the problem was worse in the mornings where the batteries are at their lowest, so my thoughts turned to the performance of the macerator and in particular with all the clues the likely cause being voltage drop.

I tested the voltage after a good charge. At the main 12v distribution board 12.83v, which showed 12.37v at the toilet no load.  On start up the voltage dropped to 8.5v rising to 10.5v for the rest of the flush.  This was a water only test and of course would take less power to macerate than a "full" load.  This combined with the run being about 2/3 of the maximum recommended put the system under great strain.

Clearly this was less than ideal although I had used wire gauge theoretically ample to cope with the run distance and load.  My next idea was to run another wire of the same gauge which I did as a temporary.  This had very little effect, improving voltage by about .5v.  I then connected a well charged battery right next to the toilet with a cable run of the same gauge but only about 600mm long.  This proved highly successful with over to 12v being delivered right from the start of the cycle.

I was faced with 2 options, run a massive pair of cables to the toilet which would cause problems because I didn't have room for them without some major carpentry or abandon my original remit and use 230v for the toilet.  The latter choice won out.  OK, I know we are reliant on the inverter being on to flush the loo and if this went west we couldn't flush but in reality if the inverter packed up we still have the generator.  I have further made future emergency provision by using a standard 3pin plug and socket so I can if necessary connect a small inverter to the original 12v supply and simply plug it in to there.

The fitting of the new 230v toilet has necessitated some butchery of my original neat installation.

This is what it looked like from behind before, 3 nice neat holes through the wall. 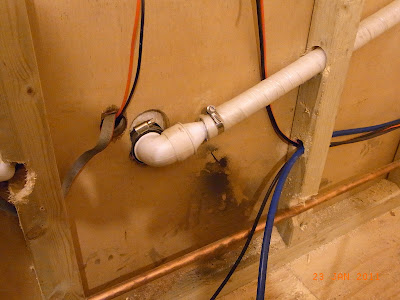 This is what it looks like now. Power was easily available from the sockets that supply the AV equipment. 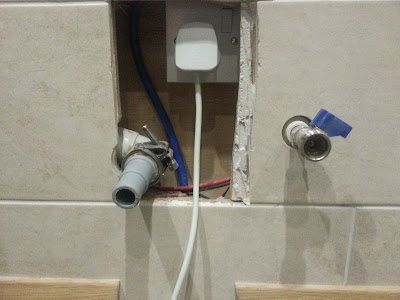 Not quite so neat but effective

And with the new toilet all fitted.  No sight of the hole now. 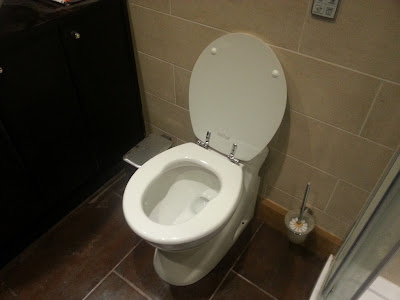 Initial tests are encouraging!  Certainly the flush is much more powerful.  The flush is now by a button on the side of the toilet which is not what I expected from the details.  I still have the 12v toilet panel just visible at the top of the photo.  I'm going to see if this can be connected to the control in the toilet as its more convenient and I won't have to devise a cover for the panel & hole.

Once I'm happy with it all I will bolt it down securely although as it is it's pretty stable and usable.