I am sick and tired of my current 230v genset causing all sorts of problems with unstable voltage, poor quality sine wave and noise, (engine not electrical) although I suppose there is plenty of that too. My Victron doesn't like it and I have killed so many switch mode power supplies for mobile phones, iPads, even the power supplies in a Sky box, a DAB radio and a NiMH drill charger which actually caught fire didn't like it.

So why have I or indeed any boaters got a generator?  I think in most cases 99% + its to charge our batteries.  Of course we all have one bolted to the side of our main engine which by and large does an excellent job of charging the start battery for which it was designed for and a pretty fair to poor job of charging supplementary or house batteries via various methods of diverting surplus charge elsewhere.

When I did my alternator conversion the one thing I didn't expect to be as successful as it has proved was the ability to run my oven 2.2kw through the inverter and still be putting in as required depending on the SOC of the batteries up to 60amps of charge.  This set me thinking, why the hell am I making 230v to run my inverter charger to then charge the batteries at a maximum of 120amps when my new alternator on the main engine I have seen putting in over 180amps without conversion losses.  I have read somewhere that the Victron inverter on charge makes 800w of heat as well. Heat I really don't want. This I can well believe as I had to add additional fans to the inverter space under the stern steps in order to keep it cool enough to keep the charge rate up as it shuts down the charge rate according to the running temperature.

So you might wonder where this is leading.  Well as I see it its simple. Use my current 500cc genset engine to spin a 12v alternator instead of running a 4000cc (4L) to do the same.  Big engines like this suffer from bore glazing running on tickover or low loads.  Google bore glazing its an interesting topic with many views generally eventually agreeing its not a good thing.

My initial research lead me to a 220amp automotive alternator
but this would need spinning at 5000+rpm so gearing would be required.  I had considered running a 3kw 230v alternator at 1500rpm (4 pole) but again this still had the electrical conversion losses but in preparation for this I managed to con my current genset into running at 1500rpm by removing a slow run cutout relay.  At 1500rpm its as quiet as a sewing machine.   But then I will need to have made for me a drive pulley set and this will have additional frictional losses and belt slip reducing the limited power the genset engine has.

So having bought the 220amp automotive unit 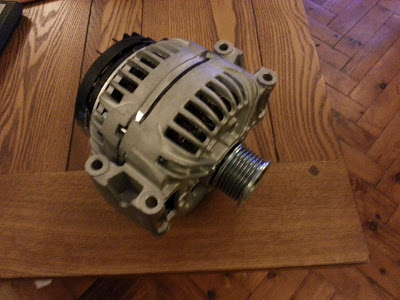 I did some more Googling  and found a slow speed 12v alternator from the USA.

The Ecoair company  make probably exactly what I and every boat owner needs, and a 24v version also.

After exhaustive discussions with one of the directors I have purchased one of the 12v (14v) units with the option of becoming the UK / EU importer distributor.

So having stripped my current genset:- 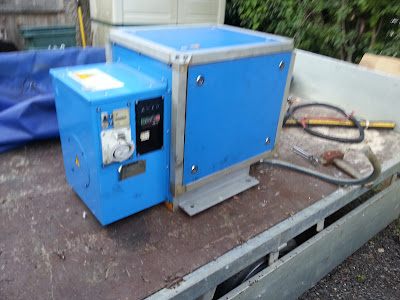 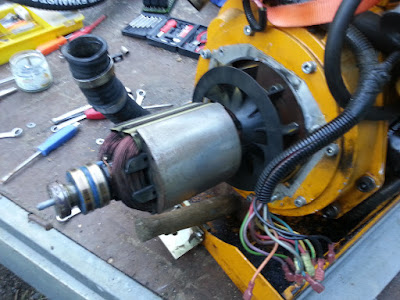 The 230v armature still to be removed 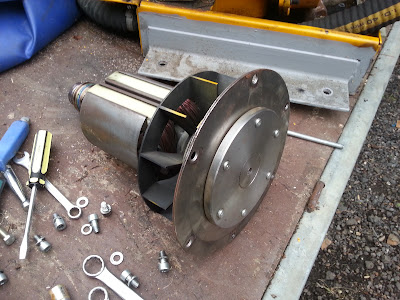 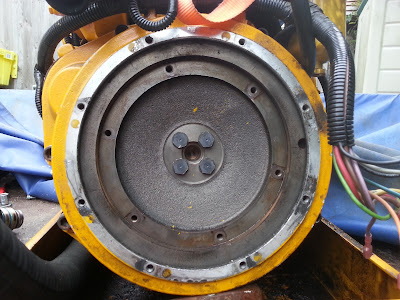 Flywheel end of the engine


This seems to be a 6 hole fixing with 200mm PCD so I will need to look up the SAE of this fixing.

This is an ongoing project so I might start a separate blog on this conversion.  In the meantime if you want to follow it make sure to bookmark it of check back regularly