I was having a real job visualising the front side panel.  This is one of the parts I spoke about earlier in the blog that was a special shape to fit with the upswept curve as the gunwall heads towards the front of cabin    bulkhead.

I had asked the designer to modify the files to do the roof a different way to the original plan.  He did this for me but I still wasn't convinced the parts would fit as I wanted.  I'm not very good with blind acceptance, I need to see things in the flesh.

The original file had already been sent to a local sign-making firm as I know the equipment to computer cut metal or vinyl are essentially the same and can be driven but the same software and files.

The sign-making firm imported the file into Corel Draw and was able to modify the size for me. Once this was done it was sent to the vinyl cutter and in a few minutes I had a full size patten.  £20 well spent IMO. 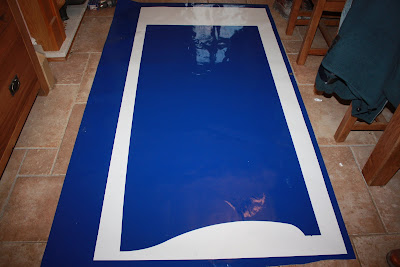 The bottom shown here is the front, the right is the roof edge

On the left side it can be seen there's a definite curve and the same on the right although its less pronounced. Its not perspective, or a dodgy lens on my camera.

After cutting round this I marked the shape out on an old piece of hardboard and cut that out.  When this was offered up to the hull.......... it fitted and followed the curve :-)  I have left it longer than the original for now as it might help with spacing the sheets that make up the cabin sides.  I will also change the shape of the front detail on the final template.  I shan't bother getting these parts laser cut now, I will do it with an angle grinder. 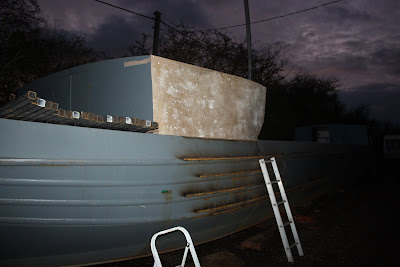 I have a side, even if it is only made of hardboard!