A Kind Of Hush

I wouldn't say our engine is particularly noisy, indeed as its getting a few hours on it it seems to be getting a bit quieter.  We had no soundproofing under the 18mm deck floor.  We have a local firm

who specialise in acoustic and thermal insulation.  I've know the owner for many years and contacted him for some advice.  He offered a 43mm laminated foam panel with 10kg man made lead type core wrapped in heat reflective foil as a solution.

The process started a few weeks ago with me making and supplying templates as TAP will make to exact size rather than just buying it in slabs as is the norm from chandlers. 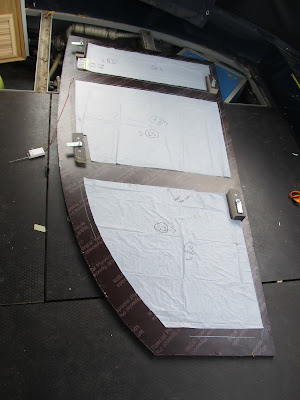 Last week I got a call to say the panels were ready and today I fixed them under the floors.  The backing is self adhesive but I decided to add some mechanical fixing too. 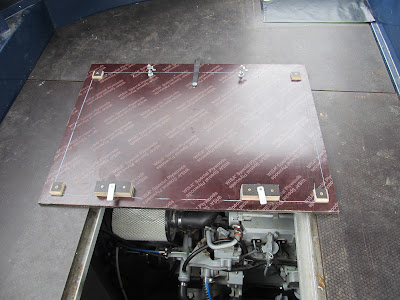 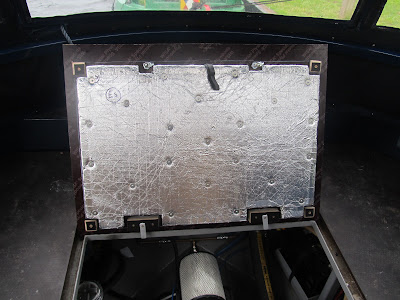 I did some dB checks with the trusty iPhone db meter yesterday while we were on the move and will do some more tomorrow when we move again.  I have to say though just with the engine on tick over there is a noticeable difference.  Of course the engine is not the only noise source, a fair amount of prop against water is present too so a static test is not really valid.

On another noise note I've had an annoying metallic buzz at 1050rmp and again at 1900rpm which can be heard in this video.

I think I've now solved it.  There's a plate covering the turbo and I think this is the cause of the problem. 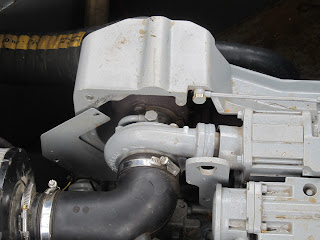 I have put it back with a few dollop's of high temperature silicone in the hope this will stop the vibration.

First off the vibration has stopped, so that's cured.

I wish I had done some more noise comparison tests at different RPM as the difference on general cruise RPM is measurably better:-

But this really isn't the whole story as I later found out.  The sound proofing actually works better the louder the engine gets, so as the RPM and prop noise builds, the sound insulation damps more of it out, so its much much quieter when the RPM is higher and the prop thrashing more.  Now its much quieter when its working harder something I didn't expect.


Another test I never considered measuring was the generator.  The genny is already cocooned but with the new under deck sound insulation the difference is very noticeable.  I will be going back to TAP to see if they can help with quieting then Mikuni CH boiler.


So in conclusion:-  Well worth installing.