We have spent the last few weeks exploring some of the tributaries of the Gt. Ouse, The River Wissey, The Lt. Ouse and The River Lark.  As lovely as these rivers are they are pretty weedy and so a couple of times the exhaust temperature light came on meaning the raw water intake filters were clogged.  Trouble with this is this starves the rubber impeller of water and it runs dry.

Once back on the deep and straight Gt. Ouse and the engine has nearly 100 hours I decided for the first time to open the engine up and let a good deal of the 114hp have its wicked way.  Top RPM is 2500 so I held back to 90% or 2250rpm  The main engine temperature remained at 85c which is normal.


After about 3 minutes the exhaust temperature warning came on.  I was a little concerned as I had cleared the filters before setting off about 20 minutes earlier and the Gt. Ouse is mostly weed free.


I cut the engine and drifted into the side to investigate.  I checked the filters and they were clear.  So after letting the engine cool down I restarted and saw nothing being drawn up from the river.  I removed the water uptake tube and felt inside the impeller housing and could feel damaged impeller blades.  As the system wouldn't self prime I filled the filter manually which was enough to get it primed. After which we were able to continue as before at about 1400rpm.


Once back at Ely I checked with Ely Chandlers to see if they had an impeller for my engine but they were unable to help but they kindly let me use their address for delivery when I found one in Leeds.  So many thanks for their help.


This afternoon it arrived and I swapped it out which took about 30 minutes. 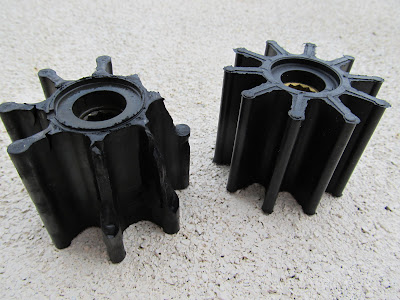 The new one has an 2 extra blades so I guess the original has been superseded.  Once changed and the system primed manually everything was back to normal, well at least on static tests.  A moving test will be done tomorrow.

Clearly the impeller is intolerant to running dry.  In the service book the impeller is a 1000 hour inspection so I think I have just been unlucky for now.  It's all a learning curve.