I've been having trouble getting my house batteries topped up and getting enough amperage from the engine alternators even though they are now paralleled.  Also we have an electric combi oven on board and the original idea was that the oven would run through the inverter powered entirely from the amperage supplied by the 12v alternators.

For some reason despite my best calculations this simply didn't pan out the way I anticipated, so the option was to replace the house alternator with one of a larger capacity.

A bit of digging around on good old ebay and I managed to find a 215amp alternator which is 100amps more than the one originally supplied as the house alternator.  It was also fortunate that the mounting spigot was the same 55mm as the original.  I’m thinking this might be some sort of standard.

This is what the alternator setup looked like originally. 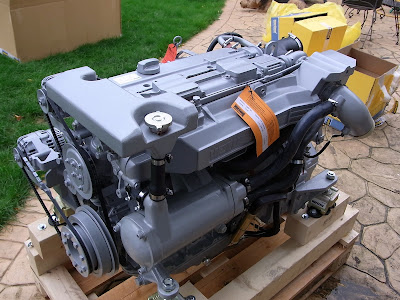 The new larger alternator obviously requires a much larger belt to drive it due to the extra load, so I ordered it with a PK7 pulley. That was the easy part!

This extra load could not be delivered by the original single V belt and the ratio was not sufficient spin it at optimum speed in the cruise RPM range.

I then needed to get the larger drive pulley. Originally I thought this would be a simple job of just getting one off the shelf as you can with many other types of drive pulley. However the PK standard of pulley seems to be specifically used in an automotive situation and the engine manufacturers make their own pulleys to suit.

This left me with no choice but to get one made. Once again Canal World Forum held the answer as one of the members Tim Leach of Dutton Dry Dock offered to make me one for me.

I was able to get RPM and charge data for the alternator and the max over speed rating from the supplier so I was able to work out the drive ratio. I settled on 4.5:1 as this would provide a very high charge at tick over and maximum charge at cruise revs of 1300rpm but would not over speed it at maximum RPM which in reality is never used. Knowing the small pulley diameter I worked out the large one needed to be 235mm

The first job was to get the existing pulley re-machined to take a 50mm shaft. 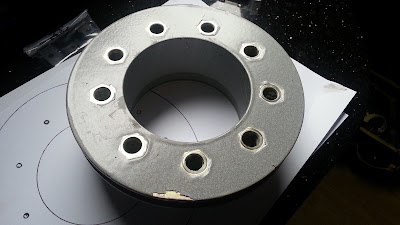 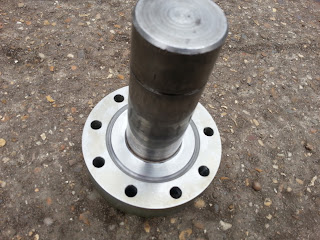 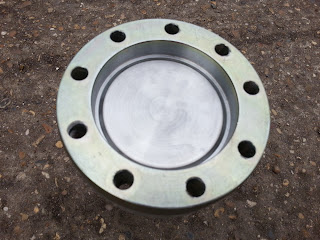 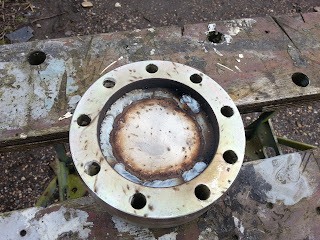 This part was done by a local engineering firm as it needed welding which I did. The shaft was left long to allow for design as it had to be made up in situe. Once the design for the pulley was finalised all the parts were sent of to Tim.
As the actual belt alignment could not be predetermined exactly the best solution was to use a Taper Lock pulley and hub. This design permits the pulley assembly to be mounted anywhere on the shaft then locked off. 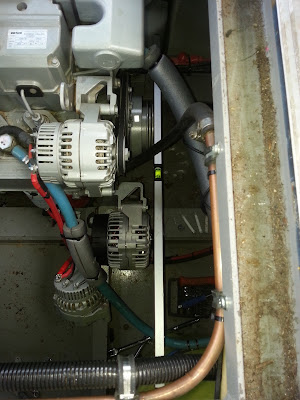 
A week or so later the pulley assembly was returned to me along with a couple of spacers I also needed. I somehow managed to lose the key which I suspect has fallen overboard so I scavenged for a but of scrap and armed with nothing more than an angle grinder and file I soon made another. 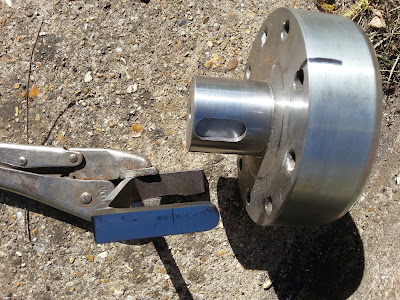 This bit of scrap turned into the new key 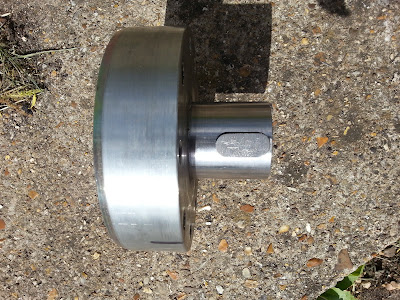 All the modifications done

One thing I didn't allow for was the bolt heads sticking out from the hub face and the original ones that would have stuck out from the rear of the pulley and sitting on top of the shaft fixing bolts, so I had to use countersunk bolts instead necessitating the back of the pulley to have holes counter sunk. 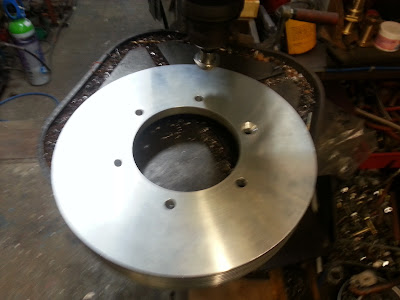 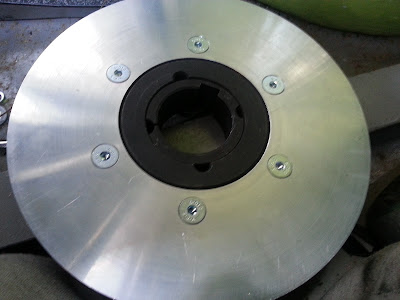 Thanks once again to Garth at The Boat Yard Ely for the use of his countersink and pillar drill.

This is what all the new parts look like. 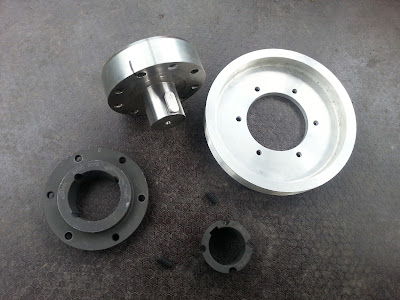 I then bolted the new shaft into place. 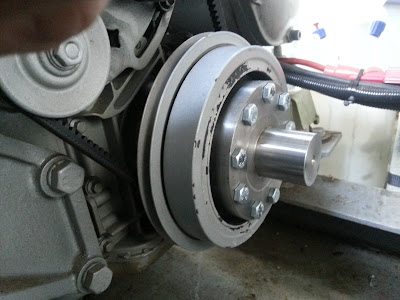 Then I positioned the new pulley and hub assembly on the shaft. Only 9 x M10 bolts! 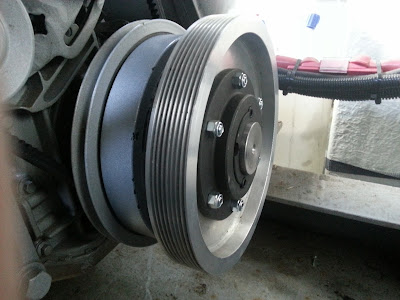 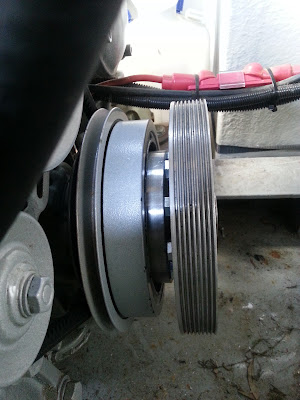 Having previously fitted and connecting the new alternator I fitted the belt, set the alignment then locked the new pulley to the shaft. 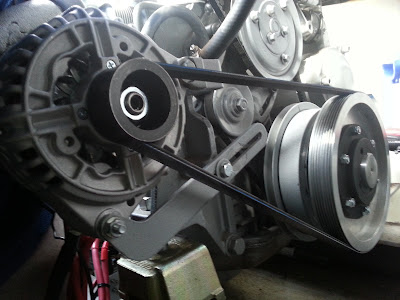 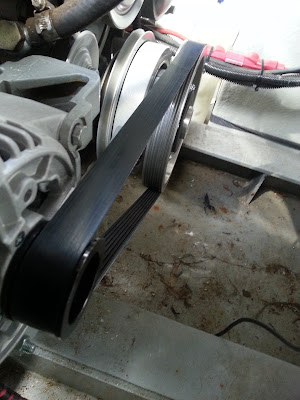 So what has all this achieved?  Well I now have over 300amps of charge with the 2 alternators working in parallel.  This means I will be able to charge my batteries much quicker and more deeply.  There's a bit more this this as any battery expert will tell you.

Also my electric oven draws roughly 220amps from the batteries via the inverter.  The basic maths on this is inverted power is 10v divided by the mains wattage. So 2200watts = 220amps at 12v out of the batteries.  10v is used to account for conversion losses.  It's not exact but it is pretty close and simple to do in your head. The previous setup wasn't quite able to supply this.  This means I can run my oven with the engine only and there's a hidden bonus in that any extra power from the alternators will go into the battery charging system so on initial tests I was running the oven and still getting a surplus 56amps of charge.  If the batteries are were even flatter there would be a theoretical 95amp spare available.

Conclusion is this has been a worthwhile modification. The next stage if necessary will be to add an external alternator regulator to increase the regulated charge voltage to 14.8v from the normal 14.4v  This is a better charge profile for my battery type.

One final note.  I did a rpm check with the engine running at a shaft speed of 1035rpm the alternator was spinning at 4565rpm so the ration calculations were pretty spot on.