I've decided to totally replace the flexible rubber sanitary hose because of the smell it was leaching.  I was going to just replace the long run in the saloon and kitchen but decided in for a penny etc.

Initially I thought this would be a complete nightmare, but a bit of thinking about it and a plan came together.

The worst part was drilling a new 2" hole in the rear bulkhead.  This of course was in a very awkward position and took about an hour as I had to keep resting because of the horrible position I had to get in made me all hurty.  I lost a bit of knuckle skin in the process of course.  I wasn't able to use the original hole as I wanted to maintain the current system until I was ready to chop it out as I had no idea how it would go and I wouldn't be able to re-fit the flexible one.

A week or 2 ago I removed a bathroom cabinet and a section of wall to gain access to part of the system. Link here. 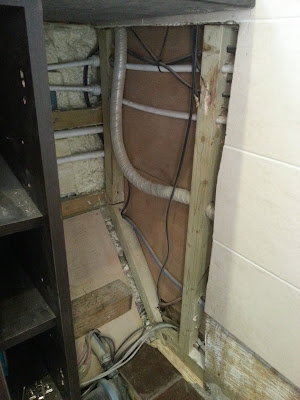 One of the main problems was going to be turning the corner to the right about 4" above where the vertical tube disappears.  I was going to simply draw the tube back and wrap it in aluminum tape to add another barrier which was suggested on the canal forum, then connect either side, Instead as I drew it back and forth I realised I could get a new piece of plastic sanitary hose round the bend.  I already had a piece of this in the system near the toilet and this hadn't developed any smell.  Indeed even when this 9" bit was removed after the previous tube purging of a dozen or so fresh water only flushes there was no smell even from the inside of the tube.

I also had to cut a 6" hole in the electric cabinet in kitchen to get my hand in to guide the the new plastic tube through the bulkhead and it's onward journey.  In doing so I shorted the Cat5 cable to the inverter against a mains wire and have damaged my inverter network bus, PC/USB interface unit and the remote panel, 1 Cat5 cable and 3 mains cables.  The cables were easily repaired as all of them were only slightly nicked, but just enough to short across the cutter :-( The new pipe was easily installed from the toilet all the way to the tank.  The whole system was replace in about 4 hours. I'ts also now easy to inspect, remove and service and only has about 2' of flexible plastic pipe throughout. 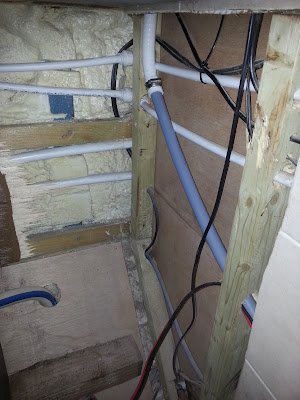 This is the only photo I took

I withdrew the old "No Smell" tube which stunk and put it outside.  To my surprise there was a lot of fine bits of lime scale grit about the size of large tea leaves inside the tube which were brown like teas leaves when wet but curiously almost white when dry.  These didn't smell at all when dry.

Next morning I noticed the smell in the saloon had completely gone and the back canopy area was where the pipe passes under the floor was also smell free.  Long may it remain.

Total cost of the replacement tube and fittings cost about £70, damage to the inverter and accessories?  I'll let you know.