I Have A Generator

A few weeks ago a CWF forum member posted to say he had a Vetus generator that had broken down.  The engine he said was fine but there was no 240v being produced.  He wanted it removed from his NB and it was free to whoever could get it out.  I contacted him and arranged to see it in situ.  It was put in with a fork lift with a long reach pole.  Space and access was very limited to say the least, and there were a range of water and hydraulic pipes right in the way. Getting it out was not going to be easy.  I went away to scratch my head.  A couple of weeks later I went for another visit to see if my mental picture and plan were feasible.  I decided it was, and took some measurements and went away to make the key bit of kit.  A pipe that could be used as a pulling point.  The unit needed to be lifted 8" but there was only 9" of space. 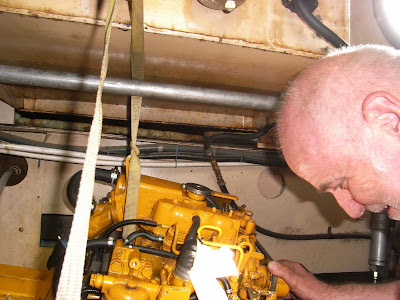 The essential pole
So this morning I set of with all the tools and equipment I needed.  The NB owner had removed all the covers and bolts holding it down to make the job easier with the very limited space I had. 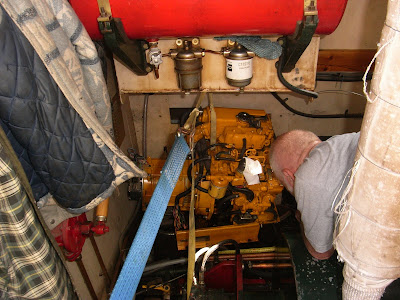 This was the test lift
Having decided it was safe to lift higher some blocks were cut and a big type of Jenga set was made as using a ratchet strap the spool soon fills up and then the load has to be dropped back and the slack strap pulled up ready for the  next lift.  This process was repeated several times until the maximum height was reached.  A long board was then slid under the leading edge. 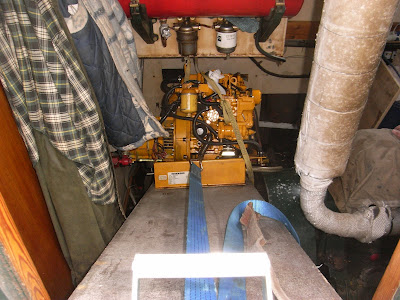 The unit was pulled again using a ratchet strap until it was clear enough to turn to go through the side hatch. 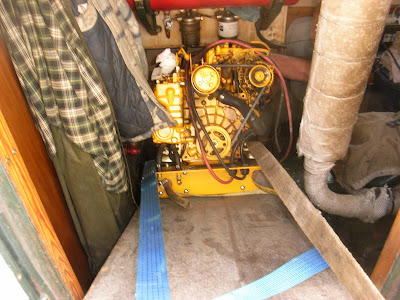 Once it was turned 2 ratchet straps were used to drag it up the ramp.  A 3rd one was used to hold the unit while the main 2 were 'reset'.  It took about 20 minutes to get the unit to the point of balance. 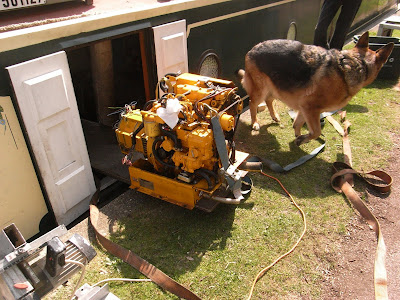 Once out of the NB it was put on a trolley. 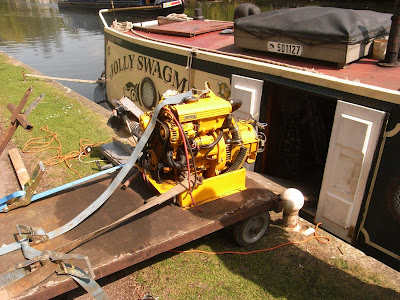 Job done
Start to finish was about 2 hours. 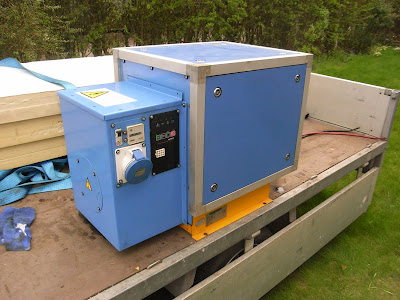 Once home I put the covers on
Just need to find out now why its not producing power.  It could be a simple as a bridge rectifier or primary exciter winding, or it could be a much bigger problem.  I have spoken to someone already who is going to come an look at it once I can run it up.
Posted by Kev's Blog Space at Tuesday, April 27, 2010 No comments:

My windows arrived today.  They are beautifully made, I'm delighted with them.  Thank you Graham of Worcester Marine Windows  great service and very nice chap and easy to deal with, realistically priced too. 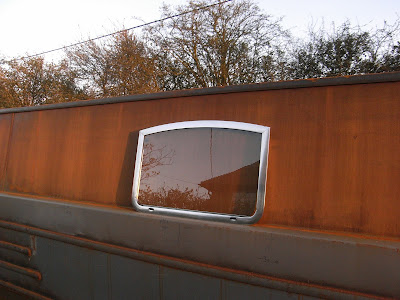 I chose bright polished anodised finish
There are 8 of these and 3 18" portholes.  Its not going to be a dull interior.
Posted by Kev's Blog Space at Wednesday, April 21, 2010 No comments: 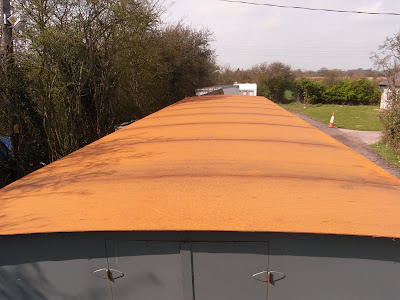 By the time the motorhome goes to the spray shop in a couple of weeks this should be ready.
Posted by Kev's Blog Space at Thursday, April 15, 2010 No comments:

I Got Heckled Today

Well not heckled as such but a comment made on a forum reminded me I haven't blogged for a while.

My time has been spent on the motorhome project as its got to be ready to go to the spray shop shortly.
I have been doing stuff in the back ground while nature is talking it course on the mill scale.
I have been researching engines, gearbox's props etc etc.  I have bought a Victron 3k inverter that came up on a good deal although its not needed yet.
The plan is to get started on the boat again while the MH is at the spray shop.  It's going to be there for about 3-4 weeks.  By the time it goes the windows should have arrived.
So nothing of real interest to blog about just now, but rest assured there is stuff going on.  To see what I have been up to have a look here.

We spent the weekend on our NB going down to open it up.  I am pleased to say there was nothing that needed attention, everything fired up without a hitch, even the Lister which hasn't been started for nearly 4 months fired into life in about 10 seconds on a battery that has sat idle.  On our mooring we don't leave the boat plugged in so none of the batteries get charged.  The domestic bank started at 30 amps but soon stepped down to 2.5, and after the engine was run for an hour down to 1.6 amps.

The toughest job was cleaning the spider poo off the Venetian blinds.  It took hours, so my wife said.  I was busy fiddling elsewhere but did do one of them and it was well stuck on for sure.
Posted by Kev's Blog Space at Monday, April 12, 2010 1 comment: