Ceiling again today. The center area is going to be pained white and is ply wood the same as the sides.  First the supporting frame. 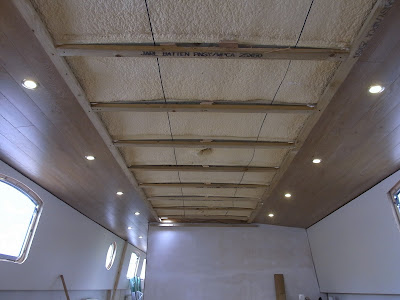 2 x 1 battening glued and screwed
Working single handed and putting up a ceiling is challenging.  With the aid of the ratchet prop used yesterday for the bucket and some temporary hold ups heres how I did it. 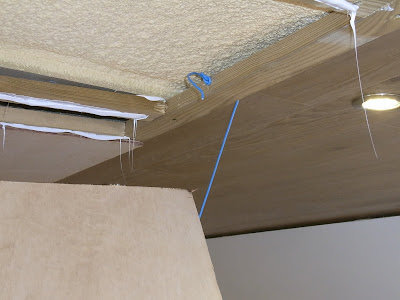 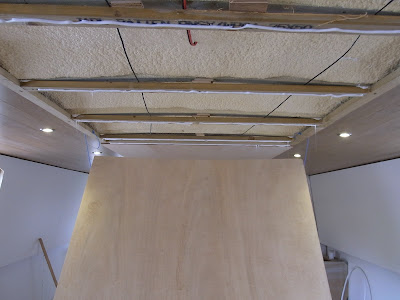 And heres the finished ceiling. 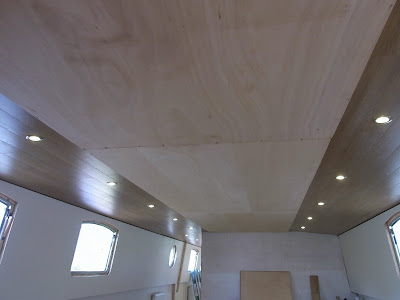 All that needs doing now is a good sanding down and painting.  I will do the bedroom tomorrow having already put up the frame work.
Posted by Kev's Blog Space at Thursday, May 26, 2011 No comments:

I have welded up the deck drain I had to cut to get the generator in, welded the generator flexible feet to the uxtor plate (base of the boat in that area), welded the bracket for the raw water strainer on, soldered the 'T' junction for the raw water strainer to share the input with the engine and the generator.
The parts for the rudder have been ordered and I have sent the rudder shaft to the machine shop for the key way to be cut and the bottom bearing to be made and started to put up the frame work for the rest of the ceiling.
The principle showable job today though was the flue for the gas fire.  Once again out came the trusty plasma cutter.  The diameter of the flue was 115mm which is the same size as a 115 grinding disk which I used as a template.  The flue needs a bit of clearance and the distance that is gained when the disk was used as a template was just right, about 3mm all the way round. 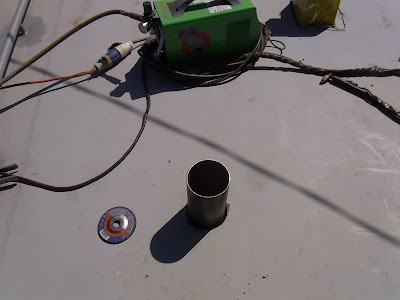 Quiz.  I'm facing due East when I took this photo on 25/5/11.
What time was it?  Same latitude as London.
In preperation for the hole cutting I removed the spray foam insulation and lined it with a metal shield. 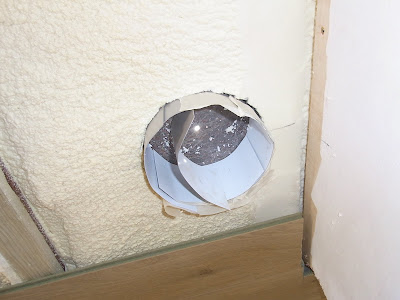 Then to catch and cool the plasma ejector a bucket half filled with water was positioned using a ratchet prop. 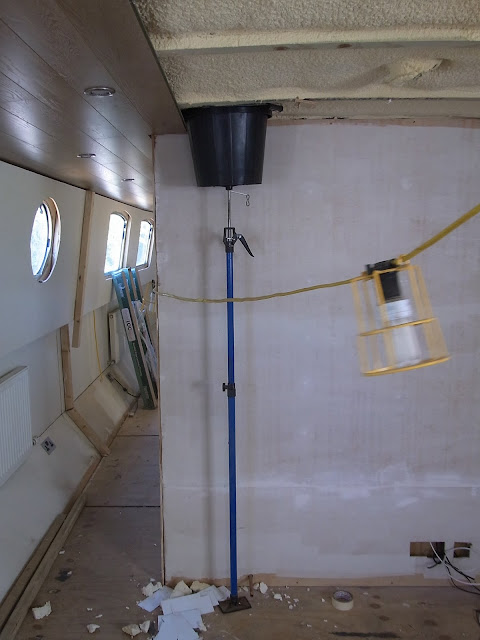 Once cut and the shield material removed this was the hole. 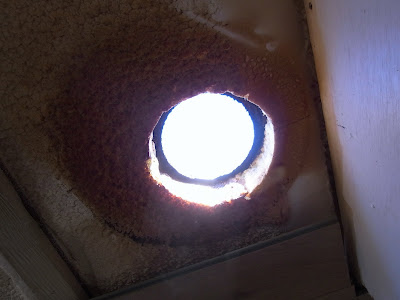 The flue may as some point in the future need to be removed so it will be fixed with an external flange.  Bring out the plasma cutter again.  The center hole was done using a worn 115mm cutting disk and the outer using a worn 250mm disk.  I like to keep it simple :-) 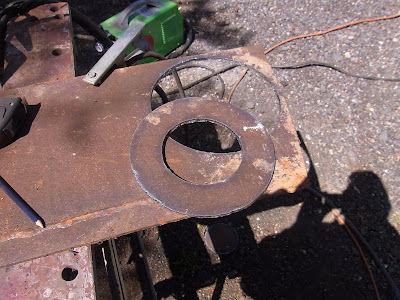 That's me in the shadow 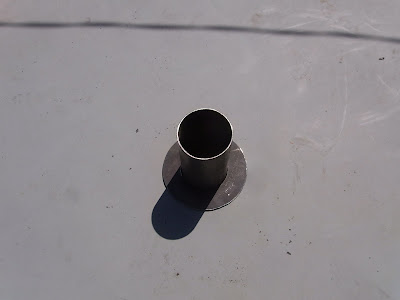 The flange will be welded to the flue once the levels are set.  I need to get my brother to make me a hearth first.  But this is something how it will look. 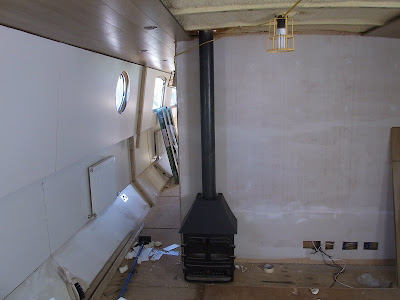 In case you were wondering why a gas fire?  Well, I think its a good idea to have a secondary form of heating on a different fuel just in case.  There was no way I was going for a solid fuel solution, all that logs and coal and ash.  Na, NOT for me!!!
Posted by Kev's Blog Space at Wednesday, May 25, 2011 7 comments:

I've been putting it off for a while now but I decided I would attach the skeg today.  The reason for putting it off is because it involved laying on my back in a tight hole under the boat doing inverted welding.  Not the most appealing of jobs you will agree.
Setting the job up simply involved using a plumb bob from the center of the top bearing hole. 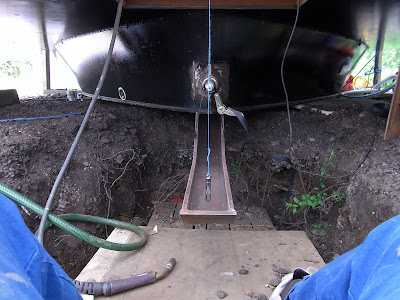 This will only work if the boat is level which if you remember I did at the beginning.   This is the top tip of this blog I think if you are going to build a boat like this.  It's made so many jobs easy to either set up or do.
The weld is of 3 passes on both outer flanges and 1 pass on the inner flanges and 3 pass weld on the outer rear and one on the inner. 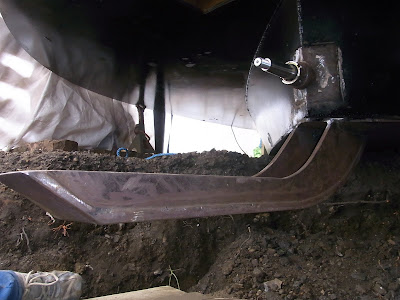 So thats another 'orrible job done and surprisingly few burns but very dirty hair and face.
Posted by Kev's Blog Space at Monday, May 23, 2011 1 comment:

This week so far has been about putting up the ceiling and installing and connecting the lighting.
You need to remember here that as I said way back, "I don't do wood".  I previously used laminate flooring to do the roof and walls of my narrowboat.  Armed with the success of this I decided early on that I would again use laminate flooring for the ceiling.  In my previous NB I used it crosswise. 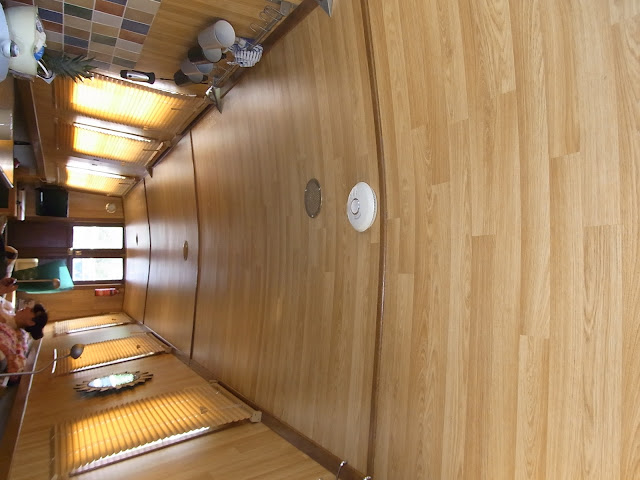 With the use of a very realistic textured oak effect laminate this is how its turned out. 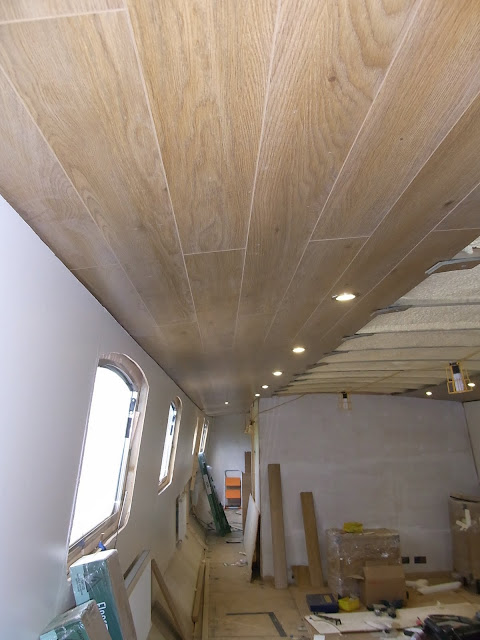 It looks very real
Of course flooring laminate isn't designed to be fixed to a ceiling.  The main problem is getting it to stay in place and getting it all to click together so it has to be done one strip at a time waiting for the adhesive to go off before the next strip can be put up.  Here is a bit of time lapse of the process.
Double click for full screen
The lighting used is 12v 60 LED warm white GU10 equivalents.  These bulbs really are as effective as the 50w halogen originals, but with less than 1/16th of the current consumption.  The lounge area is lit by 12 lights which means the whole area is lit for less power than 1 x 240v 50w halogen bulb.
Tomorrow is going to be a big tidy up day.  :-(     but mum is coming round so I think she will be deployed on the broom :-)
Posted by Kev's Blog Space at Wednesday, May 18, 2011 5 comments:

Makes a change to do some metalwork again.
I got the lids for the stern lockers back form the press works so it was now a case of making up a rim to make the lids self draining but NOT into the lockers.  I only stitch welded the frame as I didn't want to distort things too much as the lids are a snug fit. 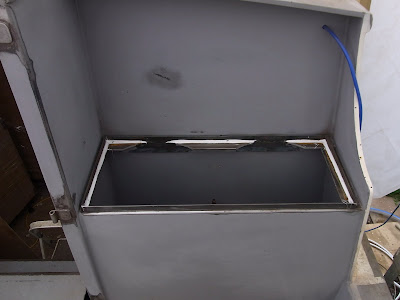 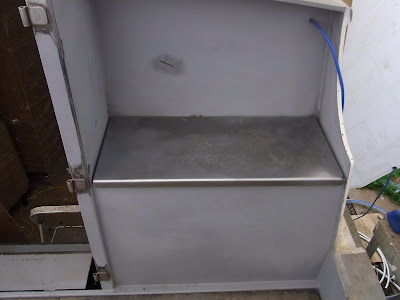 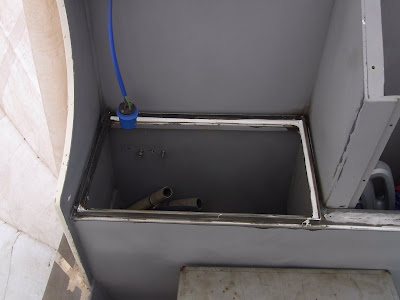 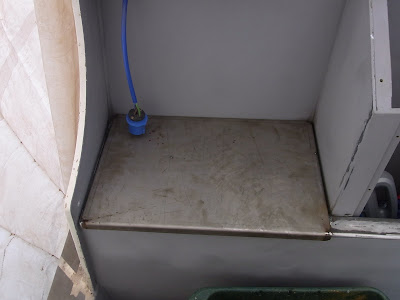 With Lid
The white line is sealer and is in place of full welding.
I have also started rubbing down the primer ready for another coat to bring in the areas I have damaged by welding then it will be on to undercoat and top coat for this area.
Posted by Kev's Blog Space at Wednesday, May 11, 2011 No comments:

Another few days of going background stuff. I have now wired up all the senders for liquid levels and wired up the helm switches for things like nav lights, tunnel lights, pump out pump, deck lighting, horn. The horn and tunnel lights are served by a rely each as the distance from the switch will cause a voltage drop. The power for these heavier items will come from the heavy cable the runs the length of the boat which will charge the bow thruster batteries.
I have also set about putting the first of the ceiling lining up, but it is a 3 person job. I'll show more on this if my plan works, if not it will be back to the drawing board.
Posted by Kev's Blog Space at Wednesday, May 11, 2011 No comments:

Back In The Saddle + Knee Update

I spoke to my other neighbor today.  She said she heard the explosion as well, in fact she said she felt it as well.
Its been a little de-motivating to be honest, but on the upside its pretty much agreed that I was very lucky not to have been injured.  I agree.
I decided to console myself with setting out the instrument and control panel and the steering pump.  This is the rough draft. 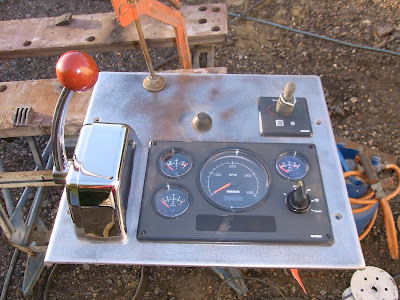 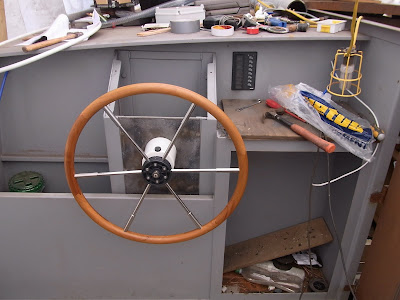 I have also drawn up and sent of for pressing the lids that will cover the lockers on the stern.  Hopefully I will get them next week.  I have a canopy maker coming over on Monday to start templating for the stern pram hood.
Finally the knee.  I've had a long term injury to my knee from a torn cruciate ligament.  For 20 + years it has been a dull ache, which from time to time flares up especially after skiing.
Well apart form having a sizable dent in my knee cap and a very large bruise my knee actually feels better.  So hopefully when the bruising and swelling goes down it might be mended.  Fingers crossed.
Posted by Kev's Blog Space at Friday, May 06, 2011 2 comments:

I spent most of today cleaning up the mess from yesterdays incident.  I removed the batteries, fortunately the battery box contained the acid spill and fortunately also seems most of the explosion damage.  I was expecting to find acid damage everywhere but seems I have been lucky in that respect.
Once the batteries were removed I used a wetvac to suck out the now naturalized acid and then because the box was put in before the engine I had to cut it up to get it out.  The new one going in will require the deck drains to be cut and re-welded at a later stage.
Once the solid debris was removed I sprayed a solution of soda around to kill of any acid, then throughly washed out the bilge and engine bay and anywhere I thought the acid might have reached.   All this took about 5 hours.  This is how the damage looks today. 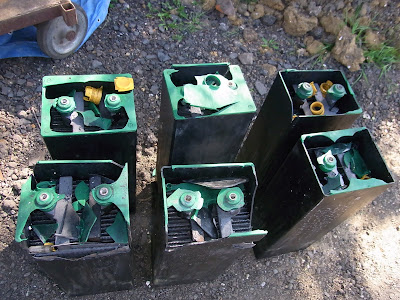 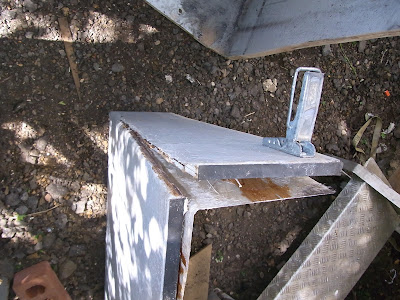 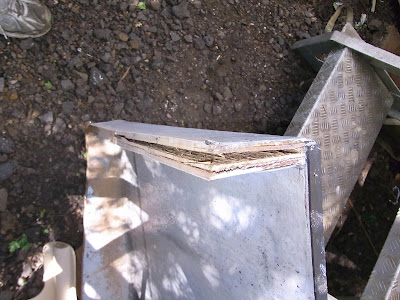 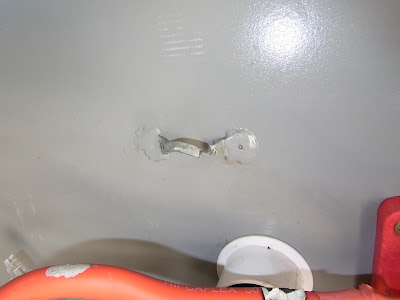 This is a metal bracket through which the
restraining straps pass.  Both are ripped 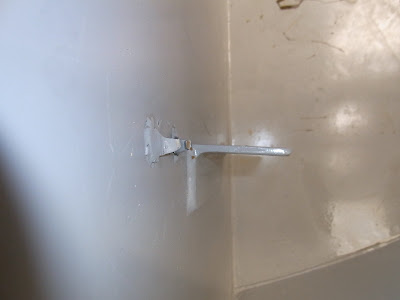 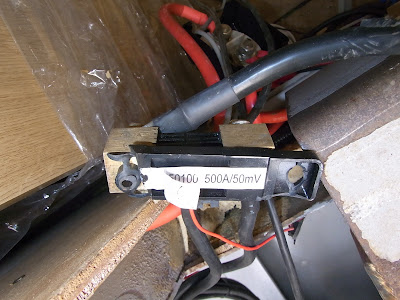 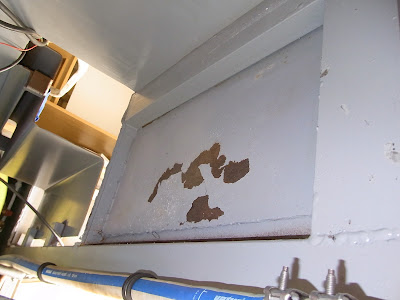 Where the power dill hit
Judging from a lot of the comments I've had from other sources I am lucky I didn't suffer any personal injury.  I have heard some horrible tails. In hindsight I think I was lucky.
On a positive note.  The massive whack I gave my knee yesterday seems to have done some good.  I have had a long term problem with it.  Time will tell!
Posted by Kev's Blog Space at Wednesday, May 04, 2011 7 comments:

Not normally would I post negative things, mainly because its mostly small stuff that happens all the time and it don't make good reading, but today is different.
Over the weekend we were away when we got home yesterday the weekend winds had destroyed my canopy. So this morning's first job was to get that back up.  Not so difficult until I slipped an whacked my knee so now that is all swollen up and very painful.
It gets worse.............
I was grinding on deck with deck boards down, all of a sudden a massive explosion, lots of misty smoke and a burning in my eyes nose and throat.  Immediately I realised the batteries that were under where I was working was the reason.  I grabbed the hose and went in with it running just in case there was a fire, but fortunately not.
So this is the result. 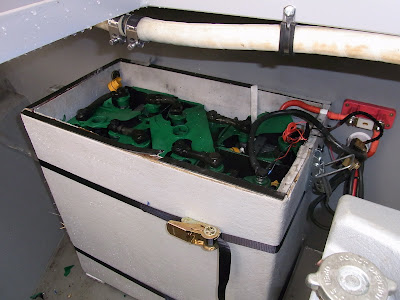 The list so far is 6 wrecked traction batteries, 1 destroyed shunt, battery box has been blown apart and on the lid was my almost new power drill.  When the lid blew off it must have hit the drill on the underside of the deck metalwork, because this is what it looks like now. 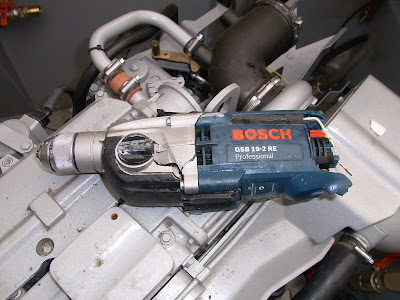 It looks like its been run over by a truck
So that was my seriously expensive day.
Posted by Kev's Blog Space at Tuesday, May 03, 2011 10 comments: