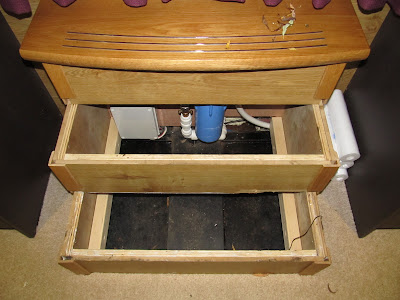 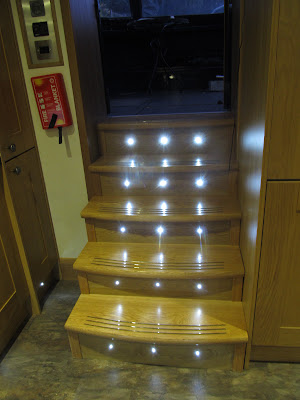 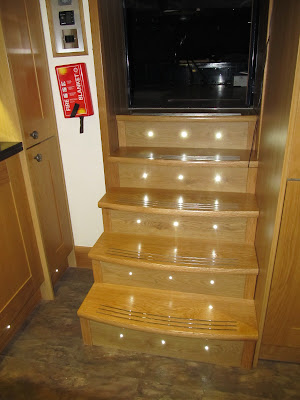 I am undecided about taking the floor out under the rear steps.  It would make a nice
pre- cooling area for beer and wine, but as the inverter is now under them this adds heat and makes the box area quite warm so I thinking this might be a source of condensation.
I will consider it again one I have put some additional fans in the side of the steps to dump this heat out.
Posted by Kev's Blog Space at Wednesday, October 24, 2012 No comments:

All available space has to be used on a boat.  When fitted the kitchen I had 2 end units that had voids behind them. One each side of the boat. 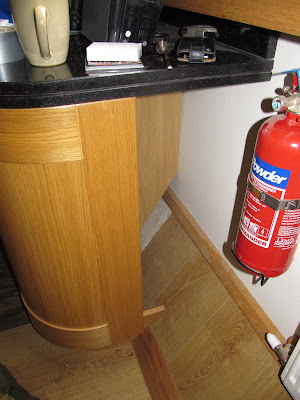 Originally I was going to make a decor end infill, but the more I left it the more it became obvious these were destined to become book shelves.

So as usual a template was made each side. 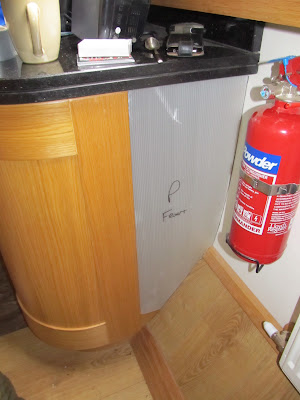 This was used to make some end panels which I painted to match the side. 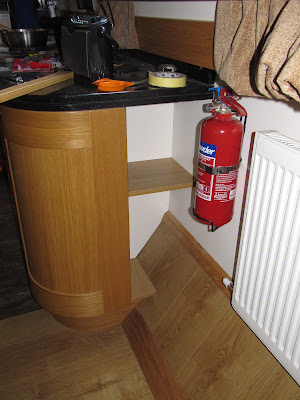 The addition of a shelf and a filler at the bottom completed the job. 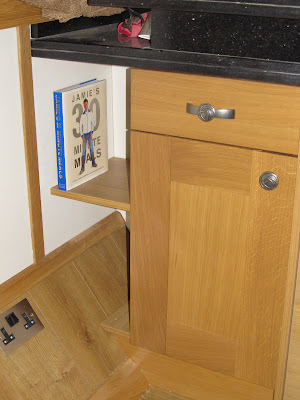 And the same the other side. Accept this side has to be easily removable so the gas pipe and a joint can be inspected when the BSC is due.

So that's another job done.  I'm running out of things that need finishing, so as it was such a nice day today I decided to re-varnish the oak bow doors, and while I had the varnish out I also did the oak thresholds which had been left and the oak vents in the rear doors.

Another of those jobs that's been hanging around is the fitting, or more precisely the securing of the bow lockers.

The lids have been loosely laid on top which looked fine but was not very safe if you stepped on them going forward as they would slip.  They were cut from templates I made then scanned into a CNC router by the same firm that did the rear decks. See here.  They also routed a bull nose so now the edges won't dig into the underside of our legs. 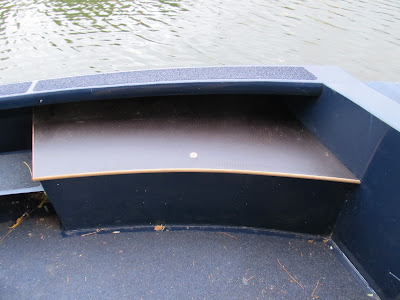 I have placed some wooden blocks on the under side that locate against the rim of the locker then to add some security I have set in a latch in each. 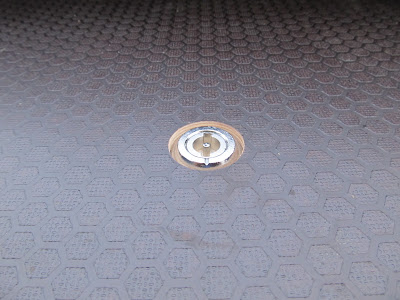 Not that anything of great value is kept in them, just I had 2 left over from doing the rear deck after changing the way I secured them down.

I've Been A Bit Of A Chump

I've been a bit of a chump. Yep! even me who is normally very, very careful with measuring, checking, measuring, reading the manual / instruction, and then doing it all again just for good measure etc.

Especially when there is expensive equipment at hand!

So what did I do?

In a perverse way I did exactly what I was doing to avoid doing what I did. When I put the inverter in I was concerned that it should be somewhere cool so I decided the engine room bulkhead would be ideal. OK, I know it gets warm in there when the engine is running, but when stationary it's the coolest place and besides when we are on the move the inverter is not really being used that hard. It seems to get hottest when charging which would be on hookup which has so far been never, or on the generator.

With the top calorifier pipe running inches away from the inverter, several blog readers voiced their concerns that it really wasn't a good setup. I had to agree in hindsight. So  a few weeks ago it was "move the inverter day". The move was from the engine room side of the bulkhead:- 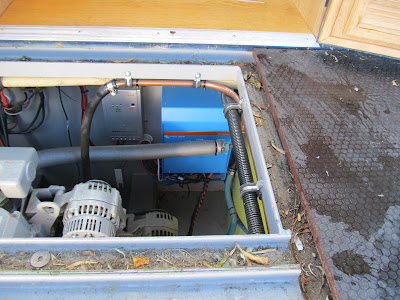 to the cabin side under the stairs.

Something that with a bit of floor hole cutting for cold air from the bilge to be drawn in and a bit of carpentry modification to the back of the stairs, a bit of cable re-routing etc. should have taken only 3-4 hours with cups of tea and ponder time.

Having done the necessary I powered up the inverter only to hear a massive "CRACK". That's the sound a 400amp fuse makes when it lets go.

So what had I done? Well despite having to put 2 very large +ve and -ve wires on each terminal in the inverter and despite the inverter having very clear "Battery +" and "Battery -" instruction on the terminals, somehow in a complete an utter parallel universe I had actually managed to ignore these very simple but fundamental instructions. I really don't know how I did it, I truly don't. My wife thinks its the onset of something more sinister, and TBH so do I. Despondently I realised what I'd done and set about investigating inside the inverter expecting to see a mass of exploded components, but with fingers crossed there was a trip or something I could reset, sort of like an idiot button. But there was no trace of either.

I contacted my Supplier Intellitec who rather than laugh at my stupidity said to send it back and they would make it better again. Within a few days the problem had been resolved and my inverter was back safe and well.  What brilliant and speedy service.  So a big thank you to them.

So with repaired inverter in hand last week I set about finishing the job.  This time doing it as per the instruction not my way. In under haft an hour the inverter was back fully working in its new home under the stairs. 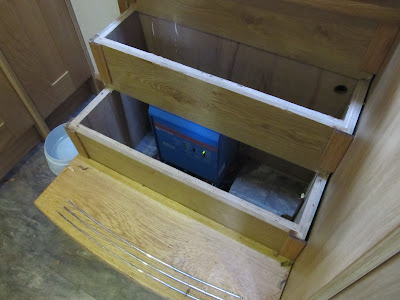 So in attempt to move the inverter to stop it getting damaged, I damaged the inverter moving it.  What a knob!  I am however consoled by the fact that if the calorifier pipe did blow the damage that could cause would have been worse for the inverter than my faux par.