A week or so ago I went to a boat show and was very impressed with a drinking water filtration set up. In the source tank was water with Elsan Blue which is very powerful chemical toilet fluid. It's deep blue as frankly stinks pretty bad and has some right nasty chemicals in it to deal with the contents of a chemical toilet. The water delivered post filter was crystal clear and totally without taste. Even my friends dog took some and they wouldn't if it had chemicals in it. OK I know dogs will drink the stinkiest dirtiest water but never with anything chemical in it. Fitting was pretty simple. I needed to drill a hole in the granite work top for the tap and cut a T into the cold water supply. Whole job done in about and hour and a half.

As our tank is new we are still getting a very slight taste of the coating and as its a large tank and at the moment we are not turning it around that fast I felt it was a worthwhile addition.  I am quite happy to drink the water straight from the tank, i don't find it that bad but Deb likes a cuppa and its not good when making tea.  She wanted a present from the show so I killed 2 birds with one stone. ;-) 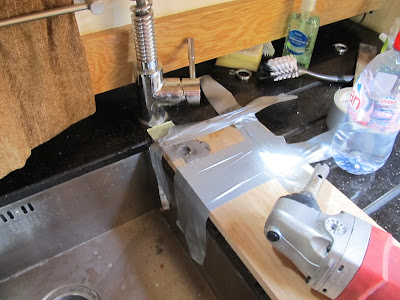 Before all this I looked out of the window and consulted the weather forecast and decided it was worth at least starting some roof painting. Keeping a watchful eye on the sky I pushed on and about 3 hours later had a coat of paint on. The surface is very textured and this amount of roof used 17L of polyurethane floor paint. 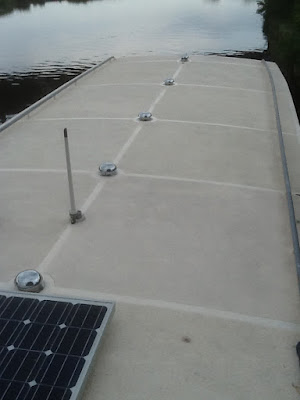 While we were away last week my laser rev counter arrived so today I was finally able to calibrate my tachometer. So another job crossed of the list.

I'm not sure how this blog will post as I have done it on my iPad and it's certainly of WYSIWYG and the photos are also done with the iPad. It might be worth checking back as I may tidy it up on the Lappy with camera photos.

This boat moored up next to us last night.

There is much talk of wrapping as a way of  "painting" a narrowboat, or indeed any boat. 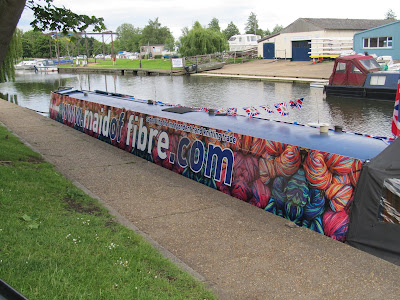 I had a very close look and even close too its difficult to see the joins.  As this is a printed design its camouflaged to a great extent.  I think if it was to be done as a single colour it would have to be done in a continuous strip or the joints over the windows at the shortest point.

The windows have also been done and from the outside they look covered but on closer inspection it can be seen they are full of small holes.  The owner said looking out was different.
Posted by Kev's Blog Space at Sunday, June 10, 2012 No comments:

A Few Days On The Move

and the Jubilee and a boat show on Monday, we finally kicked off on Tuesday with the intention of going to St. Ives which we think is a delightful town.

The distance from our home mooring is about 24miles so having kicked off quite late following a lay in and supplies shopping we decided to stop early evening about half way along. 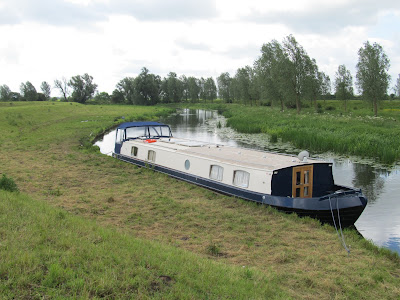 At the first lock we had to go topless, its the law!  Well actually its because the lock runs under a road and the headroom is restricted. 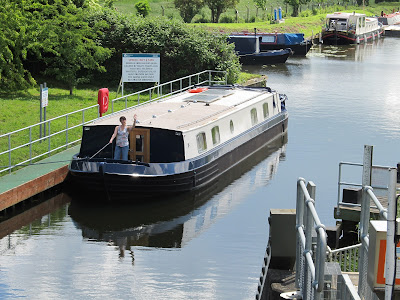 Deb gives this a good scale 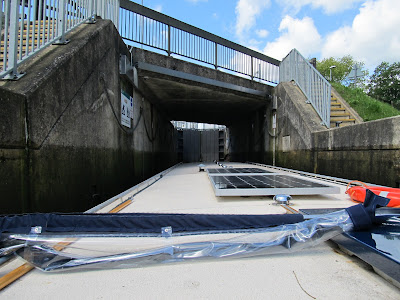 Look at the water line. This is going in 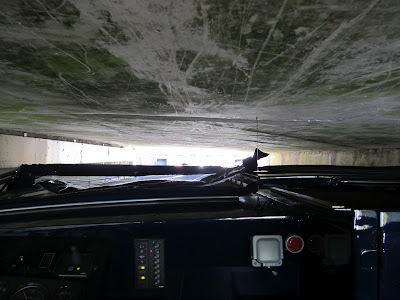 This is the headroom after the rise

So on to the next lock.  Sometime seals can be seen here but not today. This is an easy lock hardly any level change at all but still it involves the whole process. 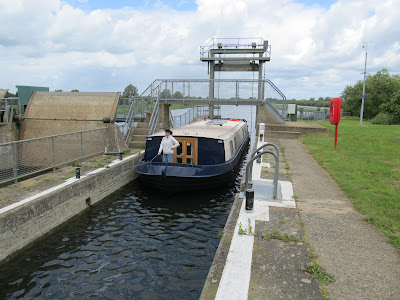 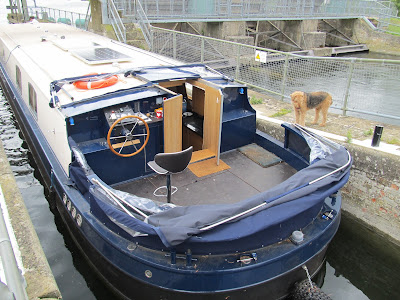 All was going well until we reached the next lock at St. Ives.  The river guide says the lock is 91' x 12'7''.  Now you would think that us being a mere 60' x 12' would fit easily.  NOPE!  we got well and truly wedged despite going in at a snails pace.  There is a jutty out part as can be seen on Brian's photos

The far end of the 3 rails. We were coming in the other way

It took Deb on the power and me and 2 other burly chaps to free us.  Words have been had with the publishers of the guide.

So we turned around and have now moored in a lovely spot near a pub. 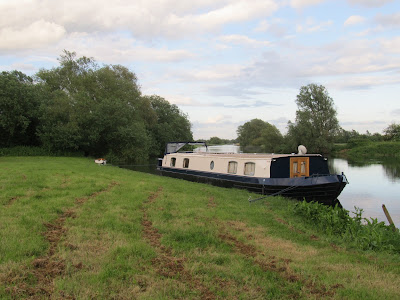