Now the roof has been painted I was able to fit the solar panels.  That was this weeks mid week visit to the boat.

Having made and fitted the mounting brackets it was time to wire up and screw them to the roof.  I had already laid in the wires in the ceiling void so this made the job a bite easier.  What made it difficult was the almost continuous rain over the last 2 days.  Anyway, after dodging what I could and getting the occasional dampening this is what it looks like. 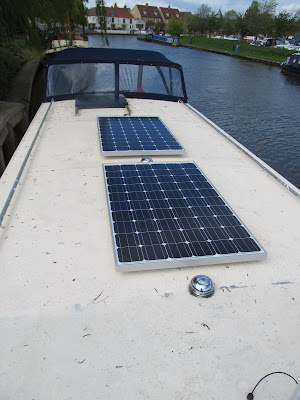 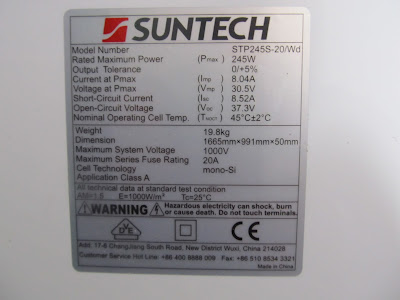 As the panels output at 30+ volts and this needs to get it into a 12v battery bank safely by reducing the voltage.

This needs another bit of kit, an MPPT controller (this site explains how they do what they do).

This is my MPPT charge controller. 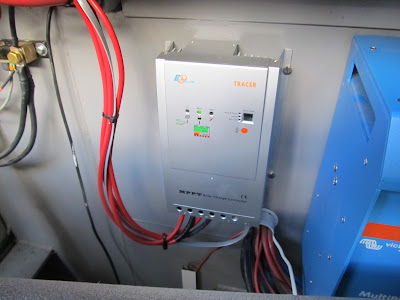 The grey cable is to the remote meter which displays loads of information about whats happening. Of most interest is the live data on the input voltage, amperage and battery levels.

I have wired the negative via the shunt so this will record on the Victron battery monitor.

This is the instruction manual for the 10amp model but its exactly the same.

So today when the sun did shine well I was getting 35amps! Even when it was cloudy and pouring down I was still getting 5amps.

Another Nice Weekend On The Boat

We had the pleasure of Sue and Vic on our boat on Saturday night after having a shopping trip into Ely for essential supplies for all and a nice pub lunch together.

Sunday was a bit of harder work. I painted some more of the roof and the concrete on our mooring was well overgrown having not been cut back for some years would be my guess.  So I dug it out.  You can see how much has been retrieved by looking at the dark stained area. 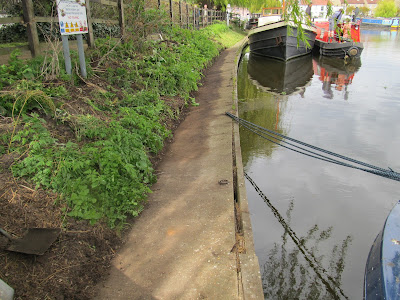 This is actually our mooring but for the time being the higher bank a bit further along suits us fine. 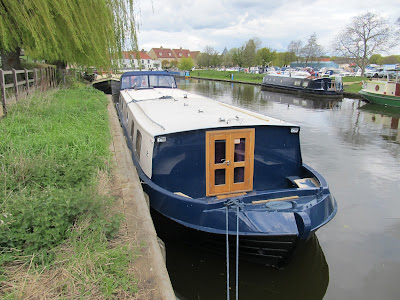 Oh, and the moorings on the other side of the river are part of a marina and the fees there are 3 x what we pay.
Posted by Kev's Blog Space at Sunday, April 22, 2012 4 comments:

I misread the requirements for the gas system in the boat, the original has got to be replaced.  Ho Hum!

Fortunately this is a reasonably easy task all be it a bit messy, but its better to sort it now then its done. 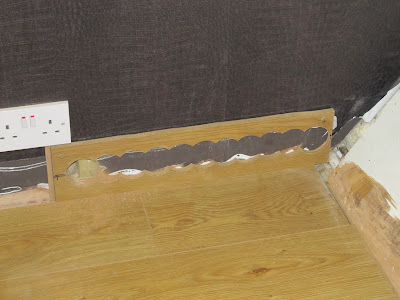 First I made a hole saw guide 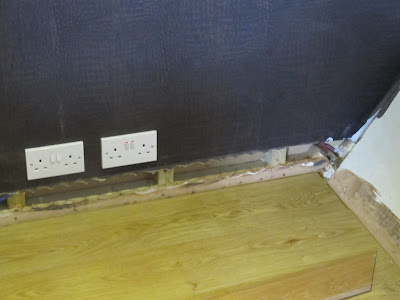 I finally manged to get a coat of paint on the last bit of gritted roof.  It's eating paint this textured surface! 7.5L to cover about  9sq/M.  This means I can finally fit the solar panels next week providing the weather plays the game.

At last I have finally finished the bathroom.  I've had the shelf units for a few weeks.  These were once again custom made to my drawings and supplied by Frinton Kitchen & Bathrooms.  Thanks to Graham and Danielle.  This company has supplied all my fixed furniture for the Kitchen, Bathroom & Bedroom.  Jolly pleased I am too.

On Friday the LED mirror arrived just in time to take to the boat which was handy as its the last part for the bathroom. 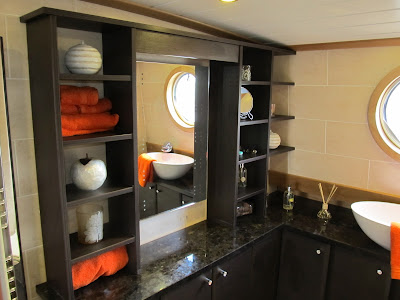 Thumbs Up For Customer Services

First here's the roof with the tape removed and the surplus grit swept off.  The weather didn't behave so it still needs painting. Oh well next time. 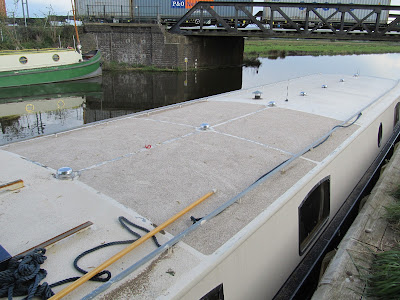 The photo of the mushroom vent surrounds wasn't very good on the last blog so I took some in daylight. 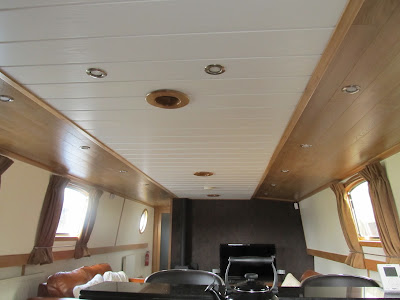 So on to customer services.

I've been having a few teething troubles now the boat is being used in the real world.  First the Central Heating boiler has been problematic for a while now.  It failed last week and gave the error code for a faulty thermistor.  I was kinda pleased that something had been signalled.  A phone call to Mikuni and as usual their first class customer service had one send out FOC for replacement.  It's my guess / hope this has been the problem all along and the unit will perform as it should for years to come.

A call to Victron in Holland to discuss it with service / support started on a trail of investigation.  First I had to plug it in to shore power to see if it would charge on shore power.  Sure enough it did.

When I bought the inverter kit I decided to get the PC interface so the parameters of the Victron could be read and reset and altered without using the fiddily dip switch option.  The software and drivers were downloaded from Victron then another call to Victron and I was talked through some alterations to the default settings and hey presto everything is talking and working together. Thaks very much to customer support at Victron.

Here's a couple of screen shots of the control.  The data displays in real time. 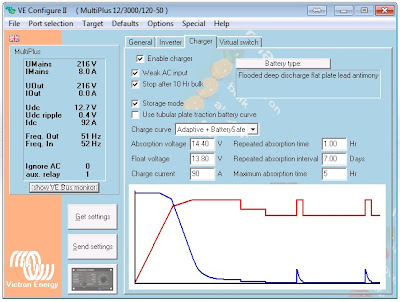 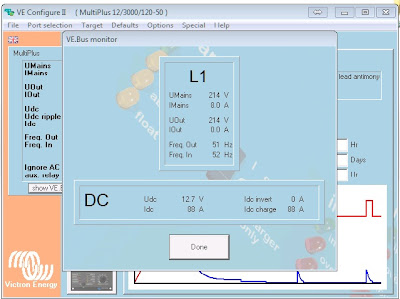 These 2 panels show input voltage which in this case is the generator, the amps being drawn in this case by the charger, the charge voltage, chargeing amperage, the mains frequency and the mains ripple, or how clean the supply is.

There's a whole load of other information which to be honest I have no idea about, but I think on balance the PC interface was well worth the money as I will use it to monitor things in future.  I'm so impressed I have ordered the PC interface that goes into the battery monitor which can store nearly a months worth of data on what the batteries have been going through.
Posted by Kev's Blog Space at Thursday, April 12, 2012 1 comment:

It's ages since I've posted.  Since we've been on the water we've been using her for some local trips and last week we spent the whole week aboard with only one night on our home mooring.

I did some small jobs on the boat like screwing down the bedroom floor at last.  Does anyone remember my first attempt a using the plasma cutter? 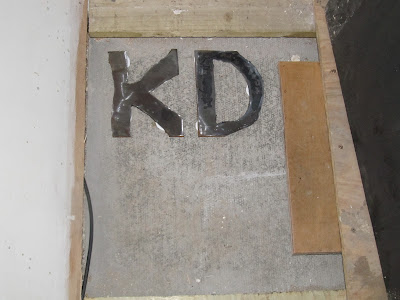 So this week it's back to work and the pressing job is the roof gritting especially this area which is going to have the solar panels on.  I want to get these on ASAP (next week all being well) now the summer is coming along and the fridge freezer is going to be working harder. 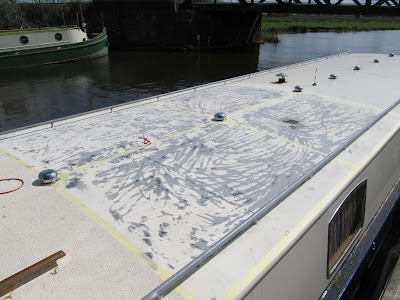 A good rub down and all masked up 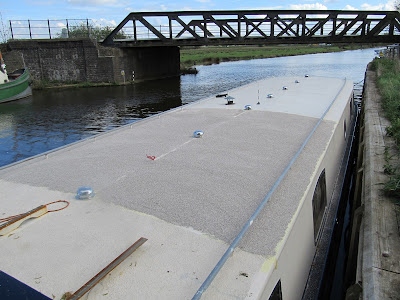 I will remove the tape in the morning and remove the surplus grit and if the weather holds get a coat of pain on.

Inside I have cut the holes and fitted the internal vent covers. 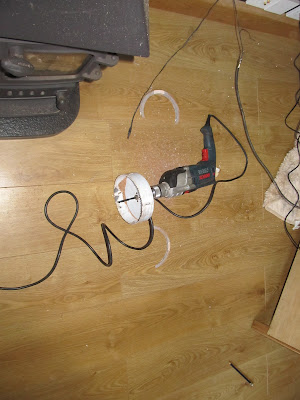 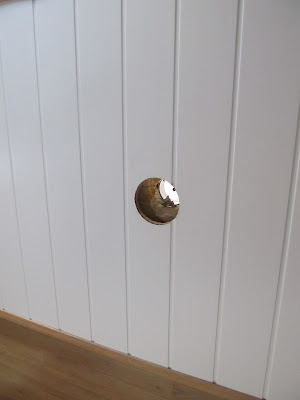 I got a very funny look when I went into the local millinery shop and asked for some Tu Tu netting in black.  I explained it was to keep insects out on some vents, I think I was convincing. 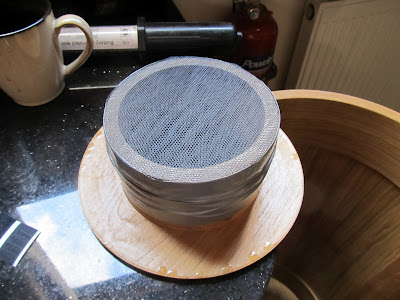 4 layers should keep the buggers out

Then finally the fitting done with self adhesive Velcro so they can be removed for access to the ceiling void and for the inevitable cleaning. 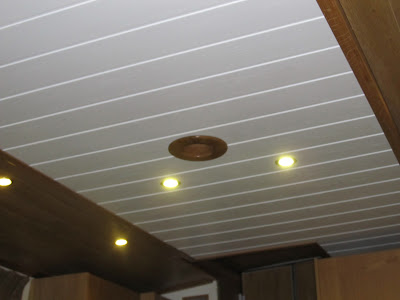