Today was the first day in ages that I didn't have the heating on while working in the boat.  Sure it's cold and damp out but suddenly +5ºC seems positively warm after the weeks of freezing weather we've had.
Only having a few hours to work on it today I decided this would be just about right to put the ceiling up in the bathroom.
I needed to cut another hole in the roof for the extractor fan.  This was fun (not).  It meant plasma cutting through then roof and into the foam insulation.  To catch any ejector I wedged a bucket part filled with water under the cutting area.  I was told the foam was flame proof by being self extinguishing.  Plasma cutting steel attached to it would be a pretty good test of the claim. 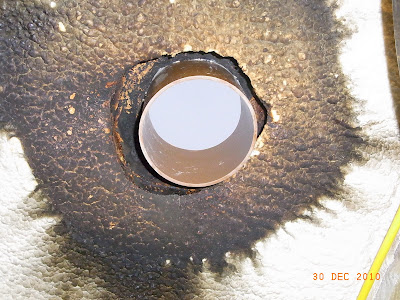 There is a fair bit of smoke damage / staining where the bucket retained the ejector, but as you can see no mass fire.  This was exactly how it ended up with no extinguishing required.  I conclude that it is flame retardant and self extinguishing, but it still makes a shed (or boat) load of smoke.  I'm not sure if it's toxic to any degree but its pretty stinky.  I should point out that my wife served as fire watch officer as I cut the whole.  She can certainly confirm the smoke and smell.
Once the hole was cut it was time to fit the drain pipe liner for the extractor.  More by luck than judgment it was a perfect interference fit as seen in the photo above.  All that was needed then was the ceiling its self.
This is a white UPVC board with a wood grain patten embossed into it.  It's the same one as I used in the motorhome I did.  Its a very nice quality board and has been commented on many times.  I like it and so chose to use it again in the boat bathroom. 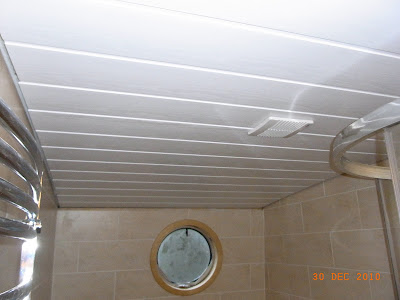 I abraded the back of the board and used adhesive and hidden staples to attach to the wooden battens.  Once fixed,  the extractor was installed.
The extractor is 12v AC which means it needs a 240v transformer but needs to switch when the 12v DC lights are operated.  This will be done with a relay.  It has to be used with the transformer as this also has the over-run timer and control built in.

Finally today I connected the plumbing to the towel rail.  The CH system is now ready for a wet test.
Posted by Kev's Blog Space at Thursday, December 30, 2010